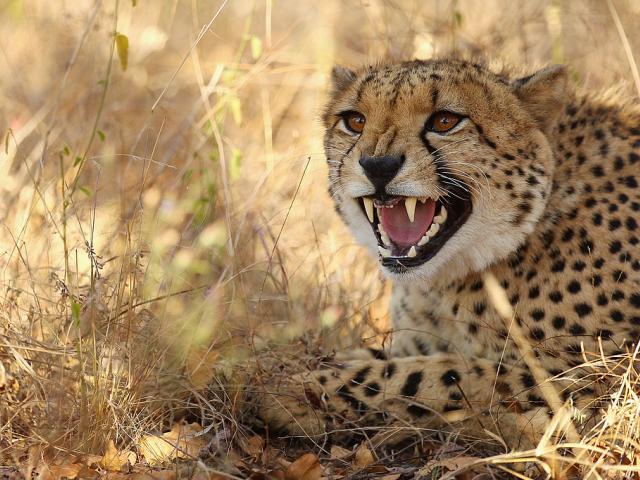 Dave Driver said mistakes made at a safari park led to his son being attacked by a cheetah. Photo Getty
The cheetah had its claws in the teenager's back, its teeth poised near his neck as it pinned the boy to the ground.

And then, a swift movement, a flash of bright orange, and it was all over.

The boy was saved, the cheetah being held to the floor nearby and frantic guards at the South African lodge converging.

The orange flash was the teenager's dad Dave Driver in his bright Pacific-inspired shirt, throwing himself at the wild animal in a desperate bid to save his son Isaac's life.

Driver spoke to the Herald this morning from South Africa where he is on holiday with Isaac (14), wife Mandy and their daughter Eve.

The Christchurch family were at Emdoneni Safari Park in Zululand on Wednesday when a cheetah launched at Isaac.

As his horrified family watched, the big cat sunk its claws into the boy.

But Dave Driver wasn't having that - and he went for the cat with all his might.

"All of a sudden there was this commotion... it was quite strange," he said.

"The cheetah just went for Isaac, I saw him biting Isaac and I'm thinking, 'He's not biting his head.

"I grabbed its neck and pulled it off him and threw it to the ground and pinned it until the guards came.

"I just remember seeing its face near Isaac's... its head on his shoulder... and thinking if it turned around and bit him... I remember saying, 'It's not getting his head'.

Driver said the cheetah was "actually quite big" and he could see it had huge teeth and claws.

"It was just instinct really, I just grabbed it and pinned it to the floor," he said.

"I remember looking at it on the ground and thinking that it wasn't as strong as I thought it would be.

"Then I thought that I didn't know what was going to happen next... as soon as it was on the floor I suddenly realised, 'This could go quite bad'.

"Luckily it didn't go mental, if it had started thrashing around and going for me..."

Driver said Isaac was pretty impressed with his dad.

"He thinks it's pretty cool... he was lying there and then he saw this big orange flash and he thought, 'Oh, cheers dad'," Driver quipped.

"At the time he was on the floor with the cheetah on top of him and the next thing, an orange flash and it was all over pretty quickly.

"Isaac's going to have a neat little scar - but obviously we're pretty happy that nothing else happened."

Driver said mistakes had definitely been made at the safari park that enabled his son to get injured.

"We're just lucky it worked out, and hopefully it will be better for other people in future."

The family will stay in South Africa until Wednesday and are off to see lions and rhinos tomorrow.

The attack has far from put them off - the day after the attack they were out on an elephant safari.

Massey University lecturer in animal behaviour and welfare Rachael Stratton told the Herald yesterday that cheetahs weren't usually aggressive but because they were wild animals could be unpredictable and there was a myriad of reasons why the animal may have attacked.

"It's really hard to say without seeing the behaviour at the time. [It] could be predatory, could be play, could be fear and could be frustration."