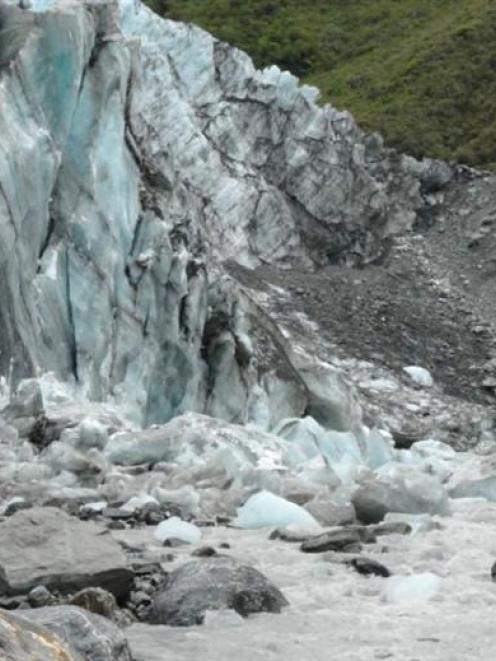 Collapsed ice at the terminal face of the Fox Glacier in South Westland. Photo: Department of Conservation.
Emergency services searching for two missing men after a sizeable chunk of ice shelf collapsed at Fox Glacier yesterday afternoon have recovered a body.

However, efforts to recover the body of the second man - also believed to be under the ice - were abandoned last night, after it became too dangerous for rescue staff to continue working, police said.

The second man is also believed to be dead.

The two men, both believed to be aged in their early 20s, were pinned when part of the glacier's terminal face collapsed about 4.20pm.

Speaking last night, Fox Glacier Guiding chief executive Rob Jewell told the Otago Daily Times the pair were believed to be travelling without a guide at the time of the accident.

They appeared to have ignored warning signs and climbed over a safety rope to walk from a safe viewing area to reach the terminal wall.

It collapsed on top of them, he said.

Details of the pair, including where they were from, were not available last night, as an emergency response operation wound down.

Police, Fire Service and St John ambulance staff had scoured the scene, along with Department of Conservation staff and six guides from Mr Jewell's company, who were trained Search and Rescue members, he said.

The Solid Energy Rescue Helicopter with paramedics from Greymouth also flew to the scene, but was withdrawn later, and the access road to Fox Glacier was closed.

Doc area manager Jo Macpherson said many people had been in the valley yesterday.

The alarm was raised by a member of the public.

"We got people there as soon as we could and they have just been trying to locate the two men from there."

Mr Jewell said his company was operating several other guided groups on the glacier yesterday, but none was in the immediate area at the time of the collapse.

The glacier's terminal face was an unstable and unsafe place to be at the best of times.

Collapses were frequent and large boulders of ice flowed downstream from the face.

Warm weather in recent days had made the glacier even more unstable, he believed.

"The present condition of the terminal face is quite steep.

"We have got warm temperatures . . . and obviously we have got frequent ice collapses, but we have had a good sized one [yesterday]," he said.

There were believed to be two witnesses to yesterday's collapse, he said, but details were not available last night.

The last glacier incident involving injury to a tourist occurred in February 2007, when a man standing beside an ice cave at the terminal face of the Franz Josef Glacier was struck by falling debris when the roof collapsed.

Doc estimated in 2007 that almost one-third of the 600,000 visitors to the West Coast glaciers ignored warning signs and entered the glaciers' danger zones.

"People don't seem to realise the risk they are putting themselves in. They are inexperienced people and they are on holiday and maybe their guard is down.

"They just don't understand the potential for something to happen," he said.

"A lot of people just like to touch the ice, which is a pretty crazy thing to do."

Department of Conservation area manager Jo Macpherson said the glacier valleys were "extremely dynamic" and the terminal face of the Fox Glacier was very steep at present and subject to random ice collapses.

The glacier valley was a safe place for visitors to go to, as long as they took notice of the warnings and did not go beyond barrier ropes.