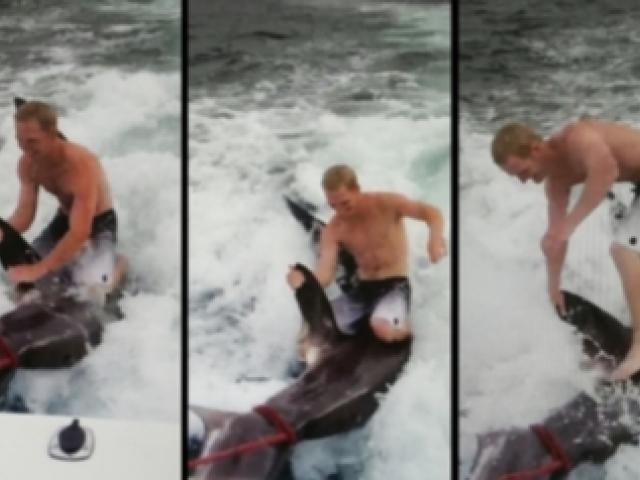 Photo from Facebook
Two men who made a video of a friend surfing on the carcass of a shark being towed behind a boat and posted it on Facebook have defended their actions.

Mark Collins said he regretted his decision to make a video of his friend Eddie Bithell surfing on a dead thresher shark in the Western Bay of Plenty but said the story had been misrepresented.

The shark was shown tied behind Zane Wright's boat by its tail and towed while Mr Bithell "surfed'' on it.

Mr Collins posted the video on his Facebook page last week without the permission of Mr Bithell.

Mr Wright, 23, said he felt regretful and responsible about the incident but said he hadn't told his side of the story.

"I go fishing up to twice a week. I've been fishing all my life and never killed a shark. It's not something that was planned. I've been game fishing since I could walk and caught hundreds of sharks and always gone out of my way to release them unharmed. I'm all for shark conservation and disgusted about what happens commercially with long lining,'' he said.

Mr Wright said they had been out sword fishing when they had hooked what the thought was a swordfish.

"We usually send them on their way but this one was hooked in the tail and it ended up drowning, which is unfortunate. There is nothing we could have done about it. We've had people say you could have cut the line if you suspected it was shark, but it's not what I do, I don't want to leave sharks swimming around with metres of line in them,'' he said.

"That's what's really stirred me up about this, nobody's got my side of the story, or knows what I am for and how we fish,'' he said.

Mr Collins said they didn't set out to kill a shark.

"They think we've gone out to murder a shark and we've ridden it while it was alive and tortured it and that's completely not what's happened.''

Mr Wright said they had taken the dead shark to shore and left it overnight before taking to back out to sea the next day.

"The shark had been dead for around 30 hours. It was on a separate trip, we were taking the shark back out to feed it into the food chain,'' he said.

Mr Collins said he made the video during the second trip with the dead shark.

"We fixed it to the boat and we took it in and left it there all night. We had a few celebrations with mates. The next day we came in and weighed it and then the next day, that's when the video happened.''

The pair said the claims they had killed a shark and ridden or had done it while it was alive were untrue.

They said Mr Bithell, who did not want to comment, was embarrassed about the video.

"He didn't know the video was going to be posted online,'' said Mr Collins.

"The video's gone; it's been deleted, I think it was a stupid idea now,'' said Mr Wright.

He said he did not get his friend's permission to post the video.

They said they had not received a call from the Ministry for Primary Industries (MPI), former Ministry Agriculture and Forestry (MAF) yet.

MPI confirmed they were investigating the shark surfing event.

"We encourage public reports of incidents of this nature,'' said the spokesperson for the ministry.''

- By Kate Shuttleworth of APNZ