Man with Down syndrome wins change to Kiwisaver 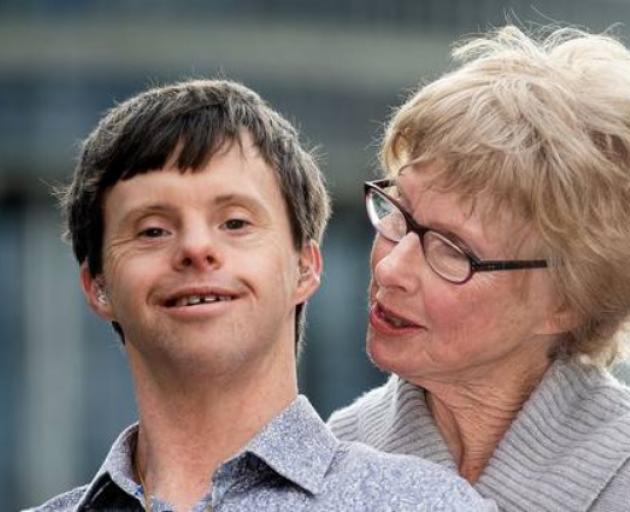 Tim Fairhall, who lives in a house in Te Atatū run by the Kōtuku Trust, is "positively dancing" after the Government announced today that it would give early access to KiwiSaver to several hundred people with life-shortening conditions.

He and his mother Joan Fairhall asked a Parliamentary select committee last year to change the rules to allow him and others with life-shortening conditions to access their KiwiSaver early - because they were unlikely to live until the normal retirement age of 65.

Commerce Minister Kris Faafoi said the rules would be changed to create a new category for early withdrawal of KiwiSaver funds for anyone with a life-shortening congenital condition.

"I want to see Tim and others like him have the ability to use their KiwiSaver to support their wellbeing in their retirement – which is unlikely to be at age 65," he said.

Joan Fairhall said her son was "positively dancing" at the news.

"We are absolutely delighted for the sake of several hundred people, perhaps 1000 people, who will benefit from this," she said.

"For Tim, it's fantastic because he can accomplish his dream of going and seeing his brother in Italy and his best friend in Canada."

Tim, who turned 40 last month, has worked part-time at the Countdown supermarket on Te Atatū Peninsula for 15 years and has accumulated just over $10,000 in KiwiSaver.

"He is officially a cleaner. He does lots of jobs like stacking shelves. The best job is breaking up boxes for recycling," Joan said.

He wants to visit his brother Scott Fairhall, an associate professor of cognitive science at Trento University in northern Italy, and his best friend, a former Kōtuku Trust support worker who married a Canadian and now lives in Canada.

"It's been a long-held dream" she said.

"But I have told him it will be a little while yet because, first, the legislation has got to pass, and, second, he is still too young to retire.

"But when he is ready to retire, and that will probably be in the next five years maybe, he can access that money and go on his trip before his joints start to run out, while he's still active."

Faafoi said the new withdrawal category would have a set list of conditions named in regulations that would automatically qualify people for withdrawal. People would need to provide a medical certificate and other evidence to qualify for withdrawal.

There would also be an alternative process for people who have a congenital condition not named in regulations to apply to their KiwiSaver provider to withdraw their savings.

"The current requirement for people to be 65 years of age to access their savings significantly disadvantages those with life-shortening congenital conditions," he said.

"The new category allows people with congenital life-shortening conditions to withdraw their savings at the point that it makes sense for them to retire.

"It's only fair that any New Zealander who has been contributing to KiwiSaver should be able to access their savings when they're ready to retire.

"By making these changes, we're ensuring that people with shortened life expectancies get a fairer deal out of KiwiSaver and that all New Zealanders benefit from the scheme."

The change will be made following an amendment to the KiwiSaver Act 2006.