0 Comments
A Muslim shop owner in Wellington has captured a customer's racist conversation on camera when she visited his store.

Nureddin Abdurahman, owner of Near And Far Import Export Limited, was working on Tuesday afternoon when the woman walked into his shop to look at rugs.

But instead of browsing the goods, the woman swiftly questioned where Abdurahman was from and what religion he practised.

After saying he was an Ethiopian Muslim, the woman said "That's a shame" before spending 15 minutes telling the shop owner that his religion was "evil". 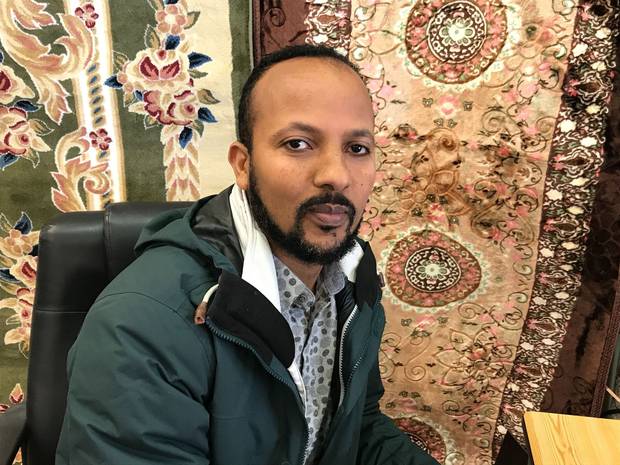 Nureddin Abdurahman was at work when a woman entered his store and started abusing him for his religious beliefs. Photo: Katie Harris
Abdurahman pulled out his phone and started recording the conversation.

"You know why I think it's a shame [you're a Muslim], because you believe in your Quran and jihad, and you can lie," the woman told Abdurahman as he worked.

When Abdurahman asked what funds she was referring to, the woman, who identified herself as a staunch Christian, said: "The attacks in Christchurch, you did get given so much but you're demanding so much more ... Muslims have the potential to bring jihad and kill us all."

Abdurahman, who arrived in New Zealand in 2008 and earned a Masters of International Relations at Victoria University, asked the woman why she sees Kiwi Muslims as a threat and why she believes Kiwi Muslims are responsible for atrocities overseas.

She responded by claiming the Quran is an evil book and tried to blame all Muslims for killings happening overseas.

"The same week [as the Christchurch mosque attack] 300 Christians were massacred in Africa by Muslims... The Quran is an evil book. Kill the Jew, kill the Christians. It doesn't have anything like that in the Bible.

"A lot of people are scared in Europe because of all the Muslims that have come in."

The woman then said while there weren't many Muslims in New Zealand, there could be more one day and that could pose a threat.

After 15 minutes of trying to understand the woman's views, Abdurahman asked her to leave.

He told The New Zealand Herald while he understands the majority of Kiwis are beautiful people, he still faces racism and Islamophobia far too often.

"My brother, I'm an immigrant trying to do my bit ... Most New Zealanders are great people. However for people like me, incidents like this, it's not only one day, it happens too often.

"After the Christchurch attacks, a woman in the shopping centre abused my 7-year-old daughter for wearing a hijab. This is an everyday thing. It's a minority but it's too much, to be honest.

"One person's behaviour is enough to ruin your day, your month, your year.

"I was trying to listen to her [the woman] and understand why she had so much hate. I was quite emotional and tried to hold it in.

"Imagine if something that you value and identify with, such as your religious belief, is being called evil. She was saying a lot of awful things about the prophet Muhammad before I started recording."

Abdurahman said he posted the video because he's "tired of racists" and wanted to show fellow Kiwis the type of discrimination he faces every day.

He said he was overwhelmed with the support shown in the community after posting the woman's behaviour and had a message for those who hold similar views as the woman.

"A lot of young people saw my video and stood up for me. They were very accepting. I know most New Zealanders are good but it was hurtful when the lady abused my faith like that.

"All I want is if there are people out there like that, to let them know people like me are just trying to get on with life.

"We have children, we have a family. We have a job and are trying to feed our families. We are not doing anything else. We are just like them. At least learn a little bit before you come and vomit on people, whatever hatred they have.

"[To the] people who stood by me and said this is wrong, I say thank you for supporting me.