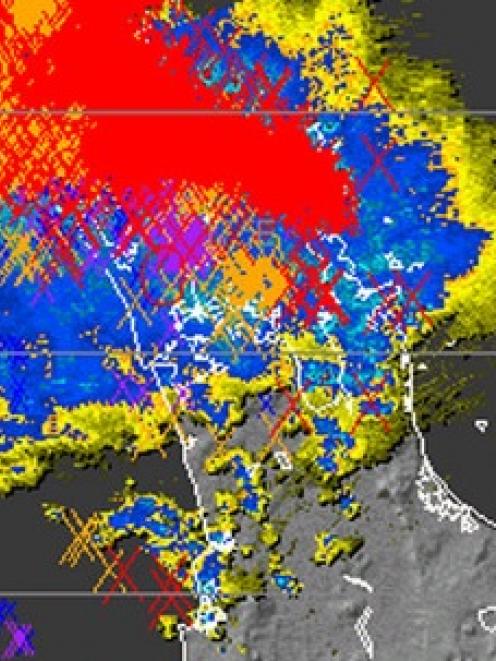 A severe thunderstorm watch is in place for Auckland, particularly the north of the city, as heavy rain, a chance of hail and gusts of 120km/h move in.

The northern region has already experienced around 8000 lightning strikes in the six hours to 8am, MetService said.

The severe thunderstorm watch is also in place for the West Coast, mainly Fiordland and Buller.

While rain and strong winds are expected across the country, with weather warnings in place for the Canterbury high country and foothills, as well as the Wairarapa.

Forecasters are warning residents to prepare for gusts of up to 120km/h.

Almost every part of the North Island will be hit by the wild weather, MetService meteorologist Elke Louw said.

"Most parts of the North Island are likely to be affected by these strong westerly to north-westerly gales for the remainder of today and into early Thursday," she said.

"The only places that seem to be sheltered are the Manawatu as well as the Kapiti Coast. Otherwise most parts of the North Island are likely to be affected by these strong winds, so they are currently under a watch at this point in time."

Auckland and Northland will bear the brunt of the thunderstorms, with the City of Sails facing gusts of more than 120km/h accompanied with the possibility of large hail.

The thunderstorms are likely to remain in the north of the city, and are expected to move towards Northland bringing with it some "high intensity rainfall" of potentially 10-25mm an hour.

"In the evening it does decrease but only to about 10-20mm possibly," Ms Louw said.

Aucklanders were "looking at some strong, possibly some squally thunderstorms for this morning", Ms Louw said.

"We're looking at quite strong gusts out of there and there could be the potential for some large hail and also some downpours where you could be looking at 25-35mm [of rain].

"It is at this point concentrated more to the north of the city but there could be one or two that could happen further south. We are looking at a risk of thunderstorms for the likes of Waikato, the western Bay of Plenty, Taupo, as we head into this afternoon."

There had already been around 2000 lightning strikes in the northern region in the hour to 8am, and about 8000 in the six hours to 8am, Ms Louw said. However, most of those would have been concentrated over the ocean.

The thunderstorm watch is in place until midday, but people are urged to keep up-to-date with MetService forecasts in case the outlook changes.

And there could be a rainbow on the horizon, with the forecast looking set to improve by tomorrow. If only for a short period.

"It does seem to be that there's going to be a general improvement, but there's another front making its way up as we head into the end of the week for the South Island once again," Ms Louw said.

"So these fronts are really fast moving and there's quite a disturbed westerly flow with that and that's what's going to be causing all this mix of weather."