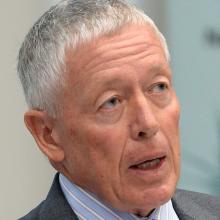 Richard Bedford
Direct effects of climate change, such as increased exposure to heatwaves and weather events, including flooding and fires, will affect our health.

But there will also be indirect effects, such as reduced water safety and challenges to our mental health, says Royal Society Te Aparangi president Prof Richard Bedford.

The society has recently released a report that looks at the impact of climate change on New Zealanders’ health.

"Think of the basic building blocks of health, such as our shelter, the air we breathe, water we drink and the food we eat; all will be affected by climate change. We can expect more particulates and pollen causing increased respiratory problems like asthma, contamination of drinking water supplies and increased toxic algal blooms, as well as increased food spoilage or crop failures, which may reduce food safety and affordability.

"Then there is the social and mental disruption that could come from the breakdown of communities if people need to relocate and also the toll that repeated stresses can have on our mental health.

"Hotter days can lead to higher rates of aggression and there is also research that shows that rates of heart attacks and strokes can increase as temperatures rise.

"Another public health risk is an increase in infectious disease if disease carriers can spread and better survive in New Zealand with a changing climate," Prof Bedford said.

The report, Human Health Impacts of Climate Change for New Zealand, is the third in the series produced by the society looking at climate change from New Zealand’s perspective. Prof Alistair Woodward, an epidemiologist and biostatistician at the University of Auckland who contributed to the latest report, said one of the changes that could strongly affect our health is an increase in droughts.

"There’s going to be a reduction in rain, particularly on the eastern side of the country (and more rain on the west), but the increase in drought frequency is going to put a lot of pressure on our rural economy.

"We know that there is a relationship between the rural economy, the welfare of the people working in the rural economy, and the frequency of mental health problems. All kinds of health issues are related to communities under stress and that’s something we’ve got to anticipate and prepare for."

"We don’t think that climate change will affect everybody equally or evenly. You can think of it a bit as a threat multiplier. Climate change is going to make life harder for people who are already suffering a bit.

"But the sooner New Zealand and the global community acts to reduce climate change, the less risk there is of us experiencing these negative effects on our health," Prof Woodward said.