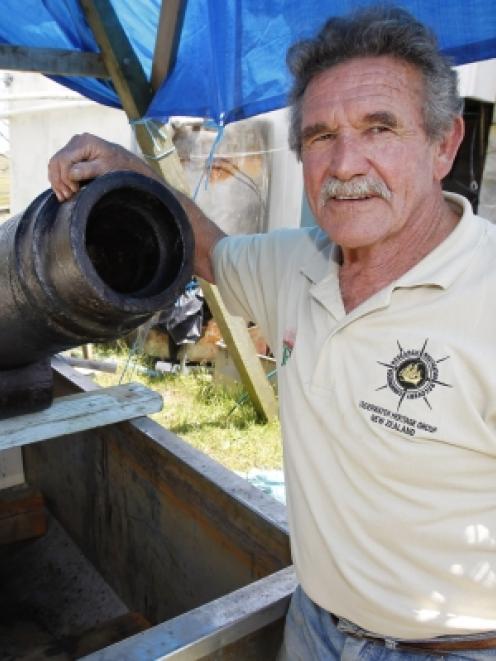 Shipwreck explorer Noel Hilliam with the 1821 French naval gun which may have been buried deep in the sand of a west coast beach north of the Kaipara Harbour beach for more than 150 years. Photo by NZPA.
An old French naval gun, which has lain buried under the sands of a beach on the west coast of the North Island for up to 180 years, is about to find a new home in the Dargaville Museum.

The 189-year-old carronade, a naval mortar which was used for lobbing explosive shells onto other ships, has been in a treatment tank for six years after shipwreck explorer Noel Hilliam and his wife Julie found it by chance on a beach west of Dargaville in 2004.

Mrs Hilliam stubbed her toe on a metal porthole, believed to have come from the New Zealand Shipping Company freighter Turakina, sunk by the German raider Orion in 1940.

Mr Hilliam, a Northland shipwreck explorer who never goes to the beach without his metal detector, began a search and found the carronade.

He said it was a chance find because about four metres of sand had been scoured off the beach by the wave action and returned within a few days.

"It dropped four metres over two tides. If we hadn't been out there I would never have known it was there. It was a real chance find.''

Mr Hilliam said a metre or so away his metal detector also uncovered an explosive charge used in the carronade.

The charge had a small, hollow wooden fuse which was filled with gunpowder. The length of the fuse would dictate when the charge exploded after the fuse had been ignited when the carronade was fired.

Mr Hilliam said he was astonished and delighted to find the carronade which was made at the Ruelle arms factory in France.

"I have read about these things but never expected to come across one. I was delighted.''

He said it was not recognisable because of the marine concretions which had formed over the cast iron carronade but he knew he had found something when it registered on his metal detector.

The carronade was placed in fresh water for six months so soak the salt out before he replaced the water with sodium hydroxide and put a small electric charge through it to protect it from deterioration .

That treatment lasted six years until the carronade was removed from the tank last week so a wooden frame would be built for its museum display.

The carronade still had a ball stuck in the barrel and Mr Hilliam said he was slowly chipping that out.

He also drilled through the wooden plug in the touch hole and found pressurised whale oil which had been put there when the carronade was on the ship to protect the inside of the gun.

"I thought I would drill the peg out and clean the hole out and I got the drill in and holy hell, she was pressurised. I got covered.''

Mr Hilliam said he had no idea of what ship the carronade came from but it could have been wrecked on the notorious west coast north of the Kaipara Harbour any time after about 1825.

Carronades were devastating short-range, smoothbore cast-iron cannons. They were often mounted on the upper decks of sailing ships and acted like a mortar, lobbing explosives up to a kilometre as a powerful anti-ship and anti-crew weapon.

They were initially successful but lost their effectiveness when long-range naval artillery led to fewer close-range battles.