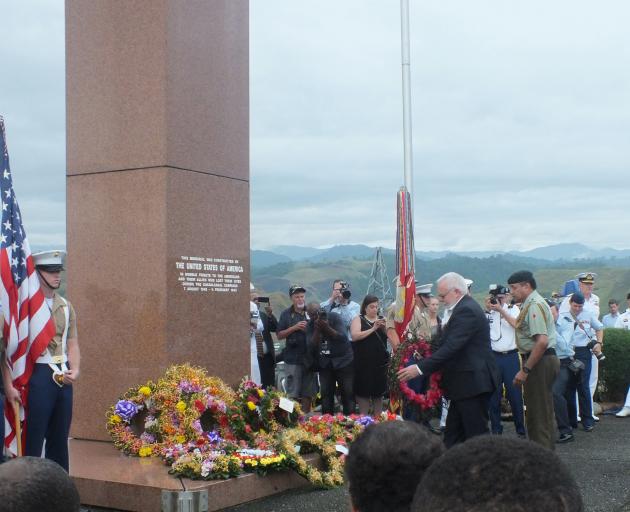 The New Zealand High Commissioner to the Solomon Islands, Don Higgins, prepares to lay a wreath on Monday at the United States war memorial on Skyline Ridge, Honiara. Photo: Gillian Vine.
The Solomon Islands has this week marked the 75th anniversary of the Battle of Guadalcanal, one of  World War 2’s most significant campaigns. The battle,  which began on August 7, 1942, ran for five months and claimed 38,000 lives after Allied forces landed on islands in Guadalcanal in the southern Solomons. Dunedin journalist Gillian Vine attended the five-day commemorations.

New Zealand Defence Force personnel, police and High Commissioner Don Higgins had a packed day as the commemorations of the 75th anniversary of the Battle of Guadalcanal, in the Solomon Islands, continued on Monday.

In his address, Mr Sogavare said: "The Solomon Islands was centre stage for one of the fiercest battles of World War 2."

His country now enjoyed cordial relations with both the United States and Japan, but nonetheless the world continued to battle with terrorism and divisions of race and relationships plaguing the world today, he said.

The New Zealand groups were among those that laid wreaths at the memorial before the participants moved to the Solomon Scouts and Coastwatchers memorial at Point Cruz. There,  Commander Stephen Woodall, of the Australian Defence Force, presented medallions to the Solomon Islands’ sole surviving scout, Timoti Oroko, and the descendants of those who — like him — had watched for enemy activity and reported back to the Allies.

"We recognise what you or your ancestors did," Cmdr Woodall said, adding that 27 coastwatchers and 20 Solomon Island scouts were killed in the conflict.

The third major activity was also at Point Cruz, the unveiling of a plaque honouring Signalman First Class Douglas Munro, of the US Coastguard, who  was killed just off Point Cruz when he put his small vessel between US Marines and the Japanese.

In doing so, he is credited with saving 500 Americans and he is the only member of the Coastguard to have been awarded the US Medal of Honour.