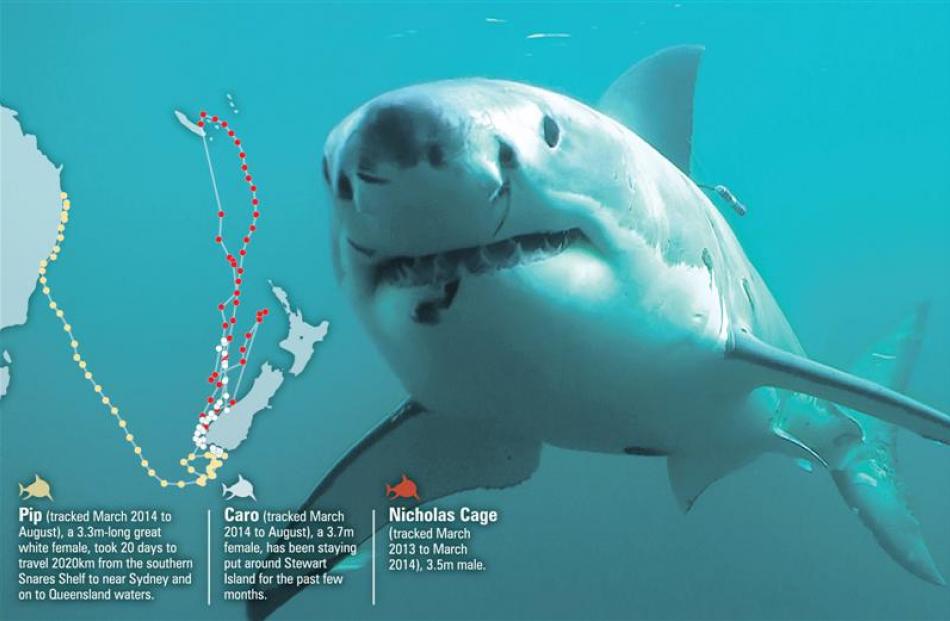 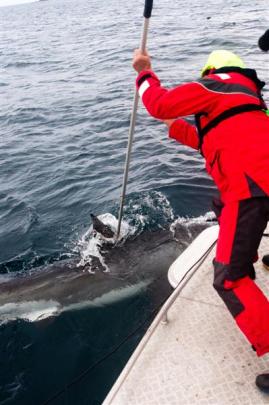 Data gathered from 10 years of tracking great white sharks will be used to discover where and when they are at the greatest risk of being inadvertently caught by fishing gear.

Scientists from Niwa and the Department of Conservation have spent the past decade tagging great whites - a protected species - and following their movements.

Since 2005, 95 sharks, mostly from around Stewart Island and the Chatham Islands, have been tagged and their behaviour and movements observed as they made their way north from the islands, mostly towards Fiordland and up the West Coast.

Niwa fisheries scientist and shark specialist Dr Malcolm Francis said only a few of the tagged sharks headed up the east coast and, when they did, it was mostly in deeper water.

The group had now finished the tagging programme and the data was being analysed to see whether the sharks' paths were crossed by commercial fishing boats in those areas.

''We want to see if there are any links with where sharks are known to occur, and the time of year, to see the areas they are most vulnerable.''

There were more reports of sharks being caught as by-catch before the species was protected, he said.

There was mostly gill net and longline commercial fishing operating off the West Coast and the majority did not have wide observer coverage on board to report any interactions with the sharks, he said.

The information from the analysis would be available for policy-makers to make decisions on management of the species.

The project's aim had been to find out how mobile the sharks were, how far they travelled and where to, and their habitat requirements.

''The first one or two we saw do this came as a real surprise.

"They go between May and July and return between December and March, spending more time out of New Zealand waters than in.''

By comparison, great white sharks living around the southern Australian coast travelled mainly up the coasts, seldom venturing into the open ocean.

The tagging also showed great whites travelled in ''a remarkably straight line'' on their migrations.

In the afternoons, they tended to spend time at the surface, but they also made regular dives of between 200m and 800m - the record depth was 1246m.

''We don't know why they're doing that - we assume they're feeding. We also don't know how they navigate in a straight line, or why.''

''It's a big puzzle and not one we are likely to work out,'' Dr Francis said.

While researchers had found out where and when the sharks went around northern Stewart Island, they did not know what they did close to mainland New Zealand.

Despite the controversy around the sharks' interaction with people in recent times, he believed people were ''relatively safe''.

''Their focus is on seals and fish, not humans.''

Once they grew to about 3m in length, they began to feed on marine mammals and headed towards seal colonies.

Estimating the size of the population was difficult, as new sharks appeared each year around Stewart Island, he said.

''Biologically, white sharks are fascinating. The opportunity to tag them and find out their migratory behaviour over the past decade has been incredibly interesting and valuable.''