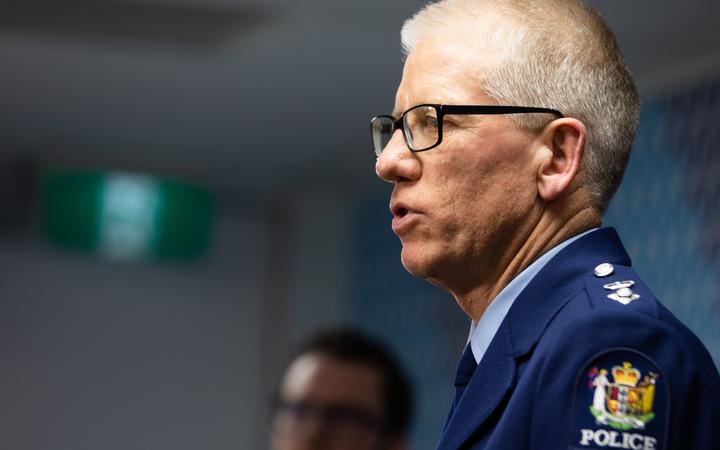 Detective Superintendent Greg Williams: "This kind of offending is completely unacceptable and is a high priority for investigators." Photo: RNZ
Police have introduced a specialist Firearms Investigation Team as gang tensions escalate across the country.

The team has been formed on a trial period as part of Operation Tauwhiro, which is focused on the disruption and prevention of firearms-related violence involving gangs and organised crime groups.

Gang violence has been on the rise in recent years, and firearms have been at the heart of more violent clashes between rival factions.

The most recent incident was in Auckland on Thursday, when shots were fired at the Sofitel Hotel at Auckland's Viaduct.

The police have confirmed the shooting had links to raids on both the Head Hunters and Mongols gangs, and another incident where shots were fired at a Head Hunters gang pad in Mt Wellington last weekend.

"The team's key focus is investigating and prosecuting people engaged in the diversion, conversions, theft and manufacture of firearms for financial gain," Williams said.

"The team will be linking in with the work already being done across all police districts on supply of firearms to gangs and organised crime."

He said the Auckland-based team is part of the National Organised Crime Group.

Williams said his teams were committed to cracking down on escalating gun and gang violence.

"Any individuals or groups in any part of New Zealand that are in possession of unlawful firearms or are involved in violence involving firearms can expect to be the focus of significant police attention," he said.

"This kind of offending is completely unacceptable and is a high priority for investigators."

Seems like the Government overestimated the honesty of New Zealand's criminal fraternity in willingly giving up their firearms following the Christchurch mosque attack.