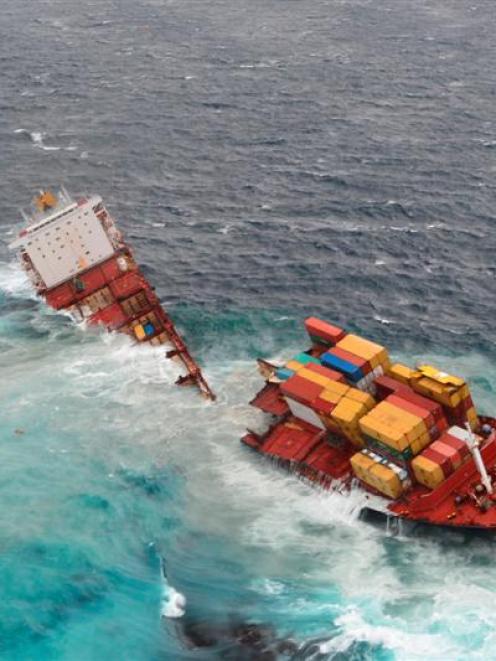 The two halves of Rena are washed by heavy seas on Astrolabe Reef yesterday. Photo by Maritime New Zealand.
Response teams and locals are bracing for fuel, containers and debris from the broken ship Rena to wash ashore today, but Environment Minister Nick Smith says it is unlikely there will be a repeat of the black tides that closed Bay of Plenty beaches last year.

The battered wreck of the Greek-owned ship, which grounded on the Astrolabe Reef, off the coast of Tauranga on October 5, finally broke in two on Saturday night in a 6m swell, with up to 300 containers tossed overboard.

There is now a yawning 20m to 30m gap between the ship's bow and stern sections. The stern is listing 23deg to starboard and is likely to sink.

Environment Minister Nick Smith said the latest development in New Zealand's worst environmental disaster was "serious but not unexpected" as maritime officials had predicted a big swell was likely to break the vessel apart.

"It was simply a matter of time before there would be a storm event of sufficient magnitude to break the vessel in two and what has transpired in the last 24 hours is very much expected," said Mr Smith.

He said things had improved from an environmental perspective with the removal of the bulk of the 1300 tonnes of oil on board, which meant "the risks for the environment are a fraction of what they were in October".

"It is possible that there will be releases of oil but they will be in the order of tens of tonnes and not hundreds of tonnes, and those things are unlikely to result in any beach closures."

Mr Smith said the bow section of the vessel was firmly wedged on the reef and would probably not shift but the stern was "likely to sink at some stage" and recovery of the containers on it had become problematic.

"Certainly, it is true that the potential for recovery of containers on the stern section of the vessel has now become an order of magnitude more difficult, given the extent of the damage to the ship.

He said trajectory modelling predicted any oil released from the ship was to have come ashore early this morning, on beaches southeast of Mt Maunganui, but this was weather-dependent.

He said salvors were working to assess its state so naval architects could undertake further calculations to get a clearer picture of its ongoing stability.

Mr Billington said more containers were likely to be lost.

Claudine Sharp of recovery company Braemar Howells said 200 to 300 of the 837 containers on the ship before the weekend storm had been washed overboard.

Of those, between 20% and 30% had been fitted with transponders and about 30 containers had already been found.

Ms Sharp said just 20% of the containers would float. The rest would sink.

Ms Sharp said the company was working closely with the harbourmaster and had been doing sonar sweeps of the harbour entrance for containers floating beneath the surface.

She said trajectory models showed containers and debris heading northwest, probably towards Waihi Beach. The debris is likely to wash ashore this afternoon, but this, again, is dependent on weather and wind.

"Our plan is to corral them and recover them promptly."

He said people needed to leave debris washed ashore to the response teams.

"Kiwis are inquisitive by nature and I'm sure there will be a lot of people on the beaches looking for debris. The main thing is if they see any, they don't touch it."