0 Comments
A fire that broke out at a West Auckland supermarket is being treated as arson - and it is thought it may have been part of a global social media craze.

A staff member at the Countdown Henderson spoke to the Herald about online videos where packets of chips are set alight.

The challenge has appeared on popular social media app TikTok and which has resulted in at least one large supermarket fire in the US already.

The New Zealand Herald understands last night's fire started in the chip aisle and that young people were involved.

Detective Sergeant Ryan Bunting confirmed the incident was being treated as an arson.

But he would not speak specifically about claims from supermarket staff that it was linked to the TikTok challenge.

Police officers and fire investigators could be seen inside the supermarket this morning - which has been closed off to the public, as authorities continue their investigation into last night's fire, which started just before 8.30pm.

The rest of the WestCity mall - where the supermarket is located - is open today. However, some businesses near the Countdown remain shut this morning.

A police officers is standing guard outside the supermarket, where a temporary gate has been put up.

The aisle where the fire started has been left torched black and debris can be seen strewn near the entrance. 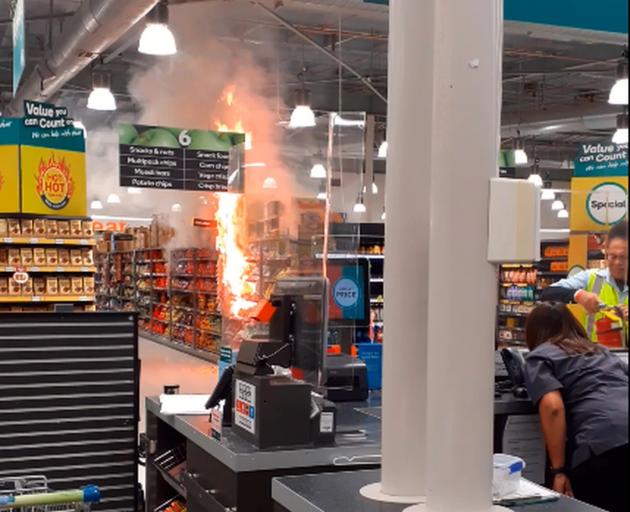 A worker in a nearby shop told the Herald that flames leapt three meters into the air - as the blaze sent black smoke through part of the mall.

As workers evacuated, members of the public stayed to film the inferno.

The complete circumstances of the fire remain somewhat unclear.

However, it is understood it started in the chip aisle.

Young people are thought to have started the blaze, the Herald understands.

About 60 firefighters were called to the supermarket, which is inside the mall, last night.

Members of the public were evacuated from the mall as a result.