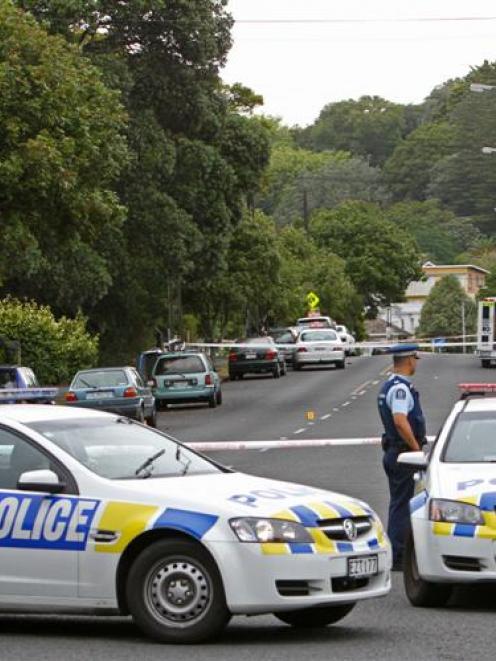 The scene where a taxi driver was stabbed during a robbery, View Road, Mount Eden, Auckland. Photo by NZPA.
An Auckland taxi company has named the driver killed in Auckland overnight.

Auckland Co-op Taxis chairman Ian Graham said he was Hiren Mohini, who had been with the company for three years.

Police have launched a homicide investigation into Mr Mohini's death.

It was understood he was stabbed and robbed in View Road, Mount Eden, part of which remained cordoned off this afternoon.

Mr Mohini was driving an Auckland Co-op taxi, which veered off the road and hit a tree about 1.30am.

Other taxis arrived at the scene within minutes after an internal emergency device inside the taxi was triggered on impact.

Residents in the street were woken by the noise of the crash and rushed to help and remove him from the vehicle.

Emergency services were called but Mr Mohini died at the scene.

Inquiry head Detective Senior Sergeant Hywell Jones said a young man who was seen running away after the crash was being sought by police.

Mr Graham told Radio New Zealand the man had picked up his last fare in the city.

The father of two daughters, aged five and two, had been well liked during his time with the company, he said.

"He was a very quiet, reserved gentleman. A true family man, loved his family, and all he was doing was going about trying to earn an honest living doing a public service," he said.

A number of employees were at the man's home today supporting his family.

A post mortem examination on Mr Mohini's body was being carried out today.