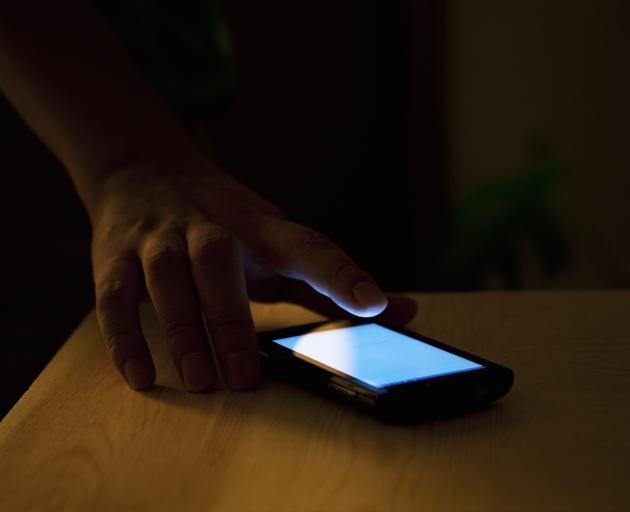 Many of the conversations took place late at night. Photo: Getty Images
A teacher has lost his registration after it was found that he would "massage" a student's shoulder during class and would later go on to text her past midnight.

The Teachers Disciplinary Tribunal said the teacher's conduct brought disrepute to the profession.

The names of the student, teacher and school have been suppressed.

The student said, in 2015, the teacher would "massage her shoulders" when giving out assessments and work. It increased in 2016 which led the rest of the class to notice and laugh.

However, the teacher said it had occurred only a few times and he shook her shoulder in jest.

The student's effective last day at school was 18 November 2016 when she finished her last exam. She formally left school later at the end of the academic year on graduation day.

On 6 December 2016, the student contacted the teacher to thank him for his help in her academic and sporting progress. The next day she arrived at school with a cake for him.

Thereafter there were a few emails between the teacher and student about how things were going.

In January 2017, the teacher, aged 49 then set up a ChatStep conversation with the student who was 18.

ChatStep is a secure, disposable online chat room. The teacher said ChatStep was more private and easier to chat.

The two talked there most nights, often between 10pm and 1am.

The conversations included the teacher asking questions like "what are you wearing" or "how many times had sex" among others.

In February 2017, the teacher set up a Facebook page where the conversations moved to. He set it up under a false name to keep his wife from learning of the profile and also to save the conversations, which were otherwise automatically deleted on ChatStep.

In May 2017, the student thanked him for his help with her university work but felt the messages had been inappropriate and asked him to stop.

The school found out about the conversations and began an investigation on 13 June 2017. A month later, in July, before the investigation concluded, the teacher resigned.

The school submitted a mandatory report to the Teaching Council on 21 July 2017 and the teacher signed a voluntary undertaking not to teach.

He said the intimate communications were confined to being online and he didn't believe that he crossed professional boundaries because the student had left school.

The tribunal, however, did not accept that an experienced teacher like him was unaware that a "power imbalance" may remain after the teacher-student relationship ends.

He said he was "ashamed and embarrassed" by the experience and it had a profound effect on his wife and family life.

The teacher "blurred the teacher-student boundary through his intimate private communications", the tribunal said.

Furthermore, it said the student looked up to the teacher for advice after she left school, hence the teacher "retained a position of trust and responsibility".

He took advantage of this, the tribunal said, adding that his offers to "assist the student with her university work were made alongside persistent attempts to initiate a more intimate dual relationship".

The tribunal cancelled his registration and censured him.