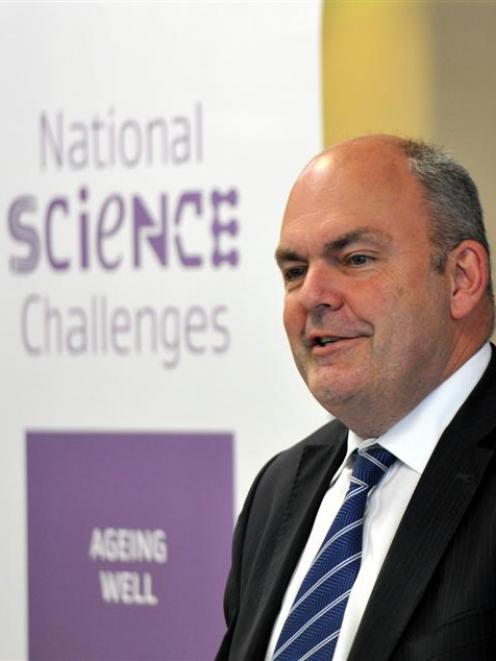 Steven Joyce speaking in Dunedin on Wednesday. Photo by Gregor Richardson.
The tertiary sector should expect much of the same from this year's Budget, Tertiary Education, Skills and Employment Minister Steven Joyce says.

Speaking to the Otago Daily Times during a visit to Dunedin on Wednesday, Mr Joyce said it was ''a bit early to say'' much about the Budget, but the tertiary sector and University of Otago should expect a continuation of previous budgetary allowances for the sector.

''I don't think we will be pulling back but the scope for new initiatives is limited,'' he said.

''The interesting thing is the economy is growing but the tax take for the Government isn't growing because of inflation, so the message coming out of Wellington for everybody is this year will be as tough fiscally as it has been for the past few years.''

Science, engineering and research remained the focus for the Government and presented opportunities for tertiary institutions to grow their reputations and income, he said.

The Government had increased science research funding by about 70% since taking office.

''I think a lot of that will flow into our universities and continue to strengthen them.''

Science and engineering degrees would continue to be the focus for tertiary funding.

''We look to fund universities in two ways: one is through tuition subsidies ... and the second way is research-based funding,'' he said.

''In the research side, we are lifting it quite dramatically. The focus in the tuition side has been to address some long-standing funding imbalances between individual disciplines.

''If you looked internationally and you looked at the cost of provision, science and engineering were underfunded.''

The Government was assessing ''whether we need to do more in certain areas based on the cost'', although it was too early to comment on what action would be taken and when, he said.

''I very much doubt there will be a general funding increase [in the Budget],'' he said.

''It would be a more targeted one ... and again it's a case of wait and see because things are pretty tight.''

Last year, university entrance pass rates dropped to the lowest level since NCEA was implemented in 2002 and the effect of that on universities was yet to be established.

Mr Joyce said first-year student numbers might drop around the country this year, but it had more to do with the fact ''the cohort is actually shrinking a bit''.

''There's a demographic bulge that's gone through ... and as the economy improves more people are going direct into work or to polytechs,'' he said.

''Increased migration and less people leaving means there will still be quite a few more in that cohort, so nobody knows quite how those forces might play out.

"But, the indications I have got so far, the drop-offs of those attending tertiary might not be quite so bad as what was thought 12 months ago.

''We are certainly not reducing the number of places funded and we are looking very closely at demand and if that was to happen we would recycle any shortfalls of funding back into the system over time.

''But I think what we need to see is a year or two of these numbers play out,'' Mr Joyce said.

A Budget policy statement which was tabled on December 16 last year said: ''As in previous Budgets, the priority for new spending in Budget 2015 will continue to be health and education''.