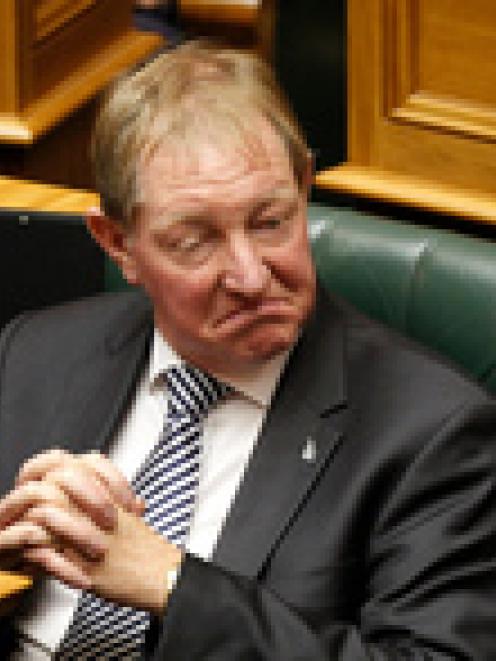 Nick Smith
With a shaking voice, National MP Nick Smith today announced his resignation from Cabinet in a statement to Parliament.

Dr Smith has been facing increasing pressure to resign since revelations that he intervened in his friend and National Party activist Bronwyn Pullar's ACC claim while he was ACC Minister last year.

At the opening of Parliament this afternoon, Dr Smith announced that he had tendered his resignation from his roles as Local Government, Environment and Climate Change Minister, and that Prime Minister John Key had accepted.

Dr Smith revealed that, in addition to the reference letter on ministerial letterhead for Ms Pullar, he had signed a second letter relating to her case in which he had not declared his conflict of interest.

The second letter was written in 2010, when another MP was advocating for Pullar to Pansy Wong, the then-Associate Minister of ACC.

"Pansy Wong, quite properly said that this was a friend of hers, she was on her campaign committee, and declared a conflict of interest, and referred that letter back to myself,'' Dr Smith told Parliament.

"ACC prepared a formal response to that letter, I signed out that error back to that constituent without acknowledging that I too had a conflict of interest.''

While Dr Smith maintained that he had not tried to interfere in Ms Pullar's ACC claim, he said his decision to resign was the "proper'' one.

"I made, not one error of judgement, but two in dealing with a conflict of interest in respect of a friend who made repeated attempts to me during my period as Minister of ACC to interfere and advocate on her case.''

"It was that second letter in which, having not erred once but erred twice, that has brought about my resignation.''

With regard to the reference letter he supplied for Ms Pullar's medical assessor, Dr Smith said it was a mistake first writing the letter "but more so in it being on ministerial letterhead''.

"I do accept that the signing of those two letters is up to the standard this Parliament can rightly expect of its ministers.''

With a shaking voice, Dr Smith offered apologies to the Prime Minister, his caucus, his family and staff.

"It is my intention to serve out this term of Parliament, I love this place,'' he said.

"I'm disappointed I'm not going to be able to continue my work in some of those areas I have a passion, but I apologise to all my fellow representatives for those misjudgments.''

In a statement this afternoon, Mr Key said it was with sadness that he had accepted Dr Smith's resignation.

"It is important that ministers are seen to actively manage both real and perceived conflicts of interest in the exercise of their duties,'' he said.

"Dr Smith has been a hard-working and diligent Minister, but perceptions do matter and he knows he has let himself down.''

Mr Key paid tribute to the contribution Dr Smith had made, saying that his expertise would continue to be valued by the National caucus.

Outside Parliament later, Dr Smith said he would not comment on the nature of his relationship with Ms Pullar "except to say I have a wonderful wife and family who are actually very distressed today, that I have been absolutely loyal to my wonderful wife and I will be to the end of my days.

"I not going to get into a commentary over the 47 years of my life, of who I might have been in relationships with or not.''

Following Dr Smith's announcement, Labour leader David Shearer said Mr Key should have asked for the resignation yesterday, and that the second letter was being used as a smoke screen.

"He had enough information and enough cause to sack Nick Smith yesterday but he failed to do so, this is not living up to his high standards,'' Mr Shearer said.

"That first letter was a clear breach of Cabinet guidelines. Nick Smith was in fact advocating for a friend in his position as a minister and it was completely wrong.''

Mr Shearer said Dr Smith had acted honourably in resigning, but he was not convinced the decision had come directly from him.

"This morning he was saying that he had no intention of resigning, so clearly either there's been some fast talking or somebody's put some pressure on him.''