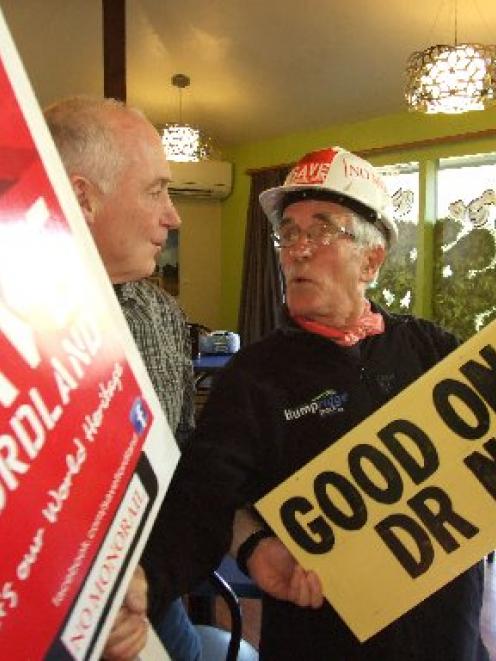 Te Anau's Ray Willett is well prepared at a gathering in Te Anau yesterday as the group awaits the Government's decision on the Fiordland monorail. Photo by Christina McDonald.
Te Anau people should be crying - not cheering - over yesterday's government decision rejecting the idea of a $240 million Fiordland monorail, its backer says.

That was the view last night of Riverstone Holdings managing director Bob Robertson, of Wanaka, who has spent the past 10 years and $5 million pushing the project first suggested 16 years ago by the late Phillip Phillips, of Queenstown.

Dr Smith rejected the proposal because independent tourism and financial analysis ''concluded it was not viable''.

Mr Robertson said the project could have gone ahead on condition he proved it was viable.

''You can't go and get an expert right now to absolutely guarantee economic viability.

''It's the wrong stage of the game. It's a hurdle a business like us shouldn't have to jump yet.

''I will take the risk on whether I spend more money ... on proving economic viability. I will do that.

''But I'm not going to do that until I know I have got a consent.''

He considered Dr Smith's decision-making process was ''flawed'' but accepted the decision brought the proposal to an end.

''This is an end for us. We wouldn't be taking this any further.

Mr Robertson believed Te Anau businesses, in particular, would be the losers.

''They don't actually really realise what they have lost.''

Dr Smith said yesterday the link would also have had ''a significant impact on the area's flora, fauna and natural heritage''.

In October last year, Dr Smith released advice from the Department of Conservation and a hearing panel chaired by commissioner Graeme Ayres that recommended he approve the project.

''There is no way the applicant could have restored the old-growth forest, tussock grasslands or wetlands the project would have destroyed.

''It could also have been catastrophic for the bat population,'' she said.

The Department of Conservation now needed to officially recognise the area's natural values and upgrade the protective status of the Snowdon Forest to ''save us all from many of these sorts of expensive and time-consuming fights in the future''.

''I did have grave concerns about the economics of this project. This decision is good news for sustainable tourism opportunities in the area, such as the Around the Mountains Cycle Trail and the project at Mt Nicholas.''

The news was welcomed by Trish Fraser, spokeswoman for Enviro Glenorchy - previously known as Glenorchy's Stop the Tunnel group - which successfully lobbied against the proposed Milford Dart tunnel.

''I'm absolutely delighted. It's fantastic news and I think Nick Smith is to be congratulated on yet another good decision.

''And the Save Fiordland group ... well done to them. They've done a huge amount of work to stop this.''

Ms Fraser hoped the decision would put an end to such proposals in national parks, which should be kept ''pure, green and without development''.

Tourism Industry Association Queenstown hotels regional chairwoman Penny Clark was also ''excited'' the proposal had been turned down, as she personally supported the Haast-Hollyford highway proposal.

''We know the drive into Milford is beautiful ... we could do that down the West Coast and it would be magic for people. It would give another route in and another route out.''

The Green Party said the decision was a victory for all New Zealanders who stood up for the environment.

''National clearly didn't want to be attacking the environment this close to the election,'' co-leader Metiria Turei said.

''This is another case of New Zealanders standing up to protect the places we love, and winning.''

''We always had confidence that his thoughtful, engineering approach would deliver the right answer ... his analysis is spot on and matches our own conclusions,'' president Robin McNeill said.

''Our 17,000 members are pretty happy right now, and so we can put our war chest away and do something useful with the money instead. That is a great relief.

''Too often, dumb ideas go too far and waste everyone's time before they get stopped because they were never going to be economically viable.''

Labour's conservation spokeswoman, Ruth Dyson, was delighted the monorail had been ''stopped in its tracks''.

''From an economic and conservation perspective, this is a victory for common sense.''

Dr Smith said the ''door is still open'' for other proposals for access in Fiordland.