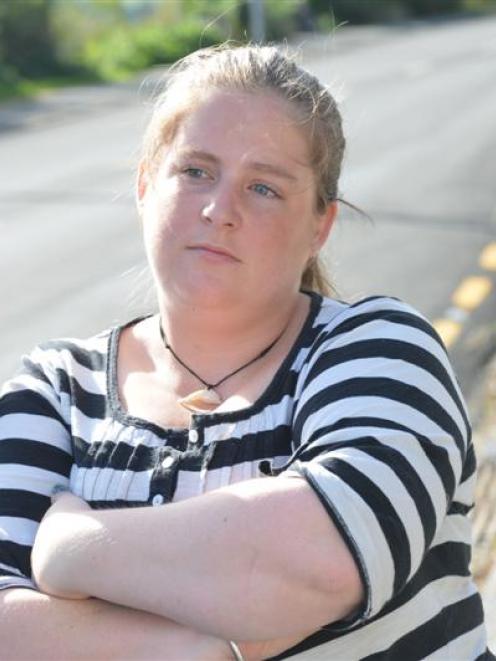 Dunedin woman Lisa Brett reflects on her battle with ACC following an armed robbery in Dunedin last year. Photos by Stephen Jaquiery.
A Dunedin dairy worker held up by a knife-wielding man for 45 minutes, says her battle with ACC left her severely traumatised.

''The easy part was the robbery ... the hard part was dealing with everything else,'' Lisa Brett (27) told the Otago Daily Times this week.

Her assailant, Tolu Maanaiama, pleaded guilty in the Dunedin District Court earlier this year, and has been remanded in custody for sentencing next month.

About 1.30pm, she went for a bite to eat in a back room when she heard the shop's bell ring.

Normally, she would look at the security cameras but this time her eye caught a man coming towards the back room.

''I thought it was my co-worker because he quite often pretended to rob me, so I opened the door laughing.

The man, who wore a beanie on his head and a scarf over his mouth, demanded to be taken to the safe, which held only Instant Kiwi scratch cards.

He then demanded the tills be opened, but was interrupted when a customer walked in. He pushed Miss Brett into the back room.

The customer - a regular who always ordered an ice cream - waited for her but Maanaiama would not let her serve him. 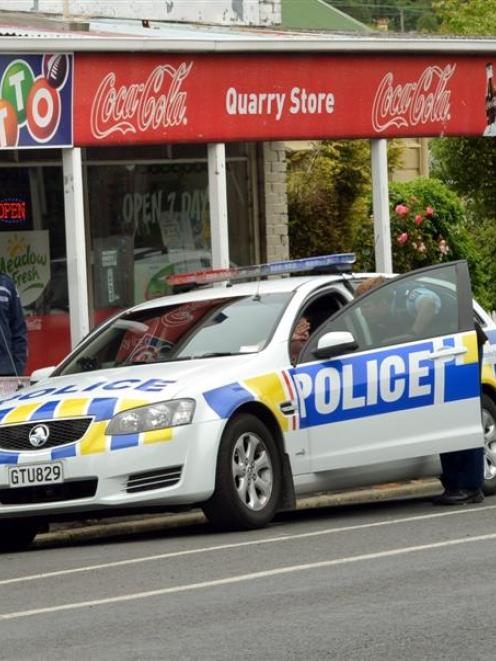 Police cordon off the Quarry Store in Northeast Valley after a female shop assistant was confronted by a masked man on November 25 last year.
As they waited, he demanded her address and driver's licence.

''He said he was worried he was going to hurt me and the customer. And he wanted more money,'' she said.

Eventually, he let her serve the customer, making an excuse she had been in the toilet. Afterwards, out the back, Maanaiama ''just freaked out''.

''He didn't know what to do; he wanted to put everything back.''

The man started panicking, worrying about his family, the money he owed. ''In the end, I told him to calm down''.

Miss Brett said she was worried children from a nearby kindergarten and primary school kids would soon come into the shop.

''I just didn't want anyone to get hurt so I needed to get him out.''

She took back her licence and after he tried to lock her in the room he fled the dairy, about 45 minutes after he first entered.

She grabbed the phone - which she was still holding when she was taken to the Dunedin Central Police Station - and dialled 111.

That is when the shock began to take over, she said.

''I remember the first cop car. I just crumpled. I grabbed that police officer and didn't let him go until he locked me in his car.''

She was looked after by Victim Support, and was told to contact ACC the next day and make an appointment with her doctor.

Traumatised from the ordeal, and with the offender - who had her name and address - still on the run, she contacted ACC as she felt mentally unable to return to work, she said.

''[ACC] made me feel like it was my fault it had happened.''

Maanaiama was arrested by police on Wednesday, December 4.

A day later, he escaped police custody and was located at an associate's house five hours later.

Miss Brett said ''I was having to do everything with ACC'' and was sick of the resulting stress on her and her daughter.

Exasperated by the lack of support, her father contacted Dunedin South MP Clare Curran to intervene in the case.

Counselling, which was first discussed with ACC on December 4, finally began almost two months after the armed robbery, with ACC giving her backdated payments on February 14.

However, she acknowledged ACC should have identified earlier that Ms Brett did not have the financial means to pay for counselling and be reimbursed.

''We understand that Miss Brett has been through a very stressful event and have apologised to her for the two-week delay in providing financial assistance to access counselling.''

Ms Curran said: ''It seems outrageous that the system would take this long and for a victim to have to go through an event that was no fault of her own.''

She released documents to the ODT relating to the case, which included a letter from ACC chief executive Scott Pickering, who reassured her ''that it is not ACC's policy to further traumatise victims of crime''.

Miss Brett, who started a new job recently, said since her file was transferred to Dunedin she had experienced excellent service.

She had also met Maanaiama - who she bore no ill-will - at a restorative justice meeting, which was beneficial to both parties.

Key dates
Nov 26: Lisa Brett contacts GP and ACC after being held up in armed robbery the previous day.
Dec 19: Dunedin South MP Clare Curran contacts ACC and Work and Income after being approached by Lisa's father, frustrated by delays affecting his traumatised daughter.
Dec 23: Lisa put on a Jobseeker benefit with deferral from work obligations for health/medical reasons. Jan 13: ACC tells Lisa it has not received info from police, doctor or employer. Police and doctor confirm they sent forms; her employer has not heard from ACC.
Jan 20: ACC phones Lisa to say she needs psychiatric report done, but a female doctor will not be available until March.
Jan 21: ACC finds female doctor after action by MP. Appointment made.
Feb 5: ACC issues decision accepting cover for mental injury.
Feb 14: First ACC payment released, backdated to December 3.