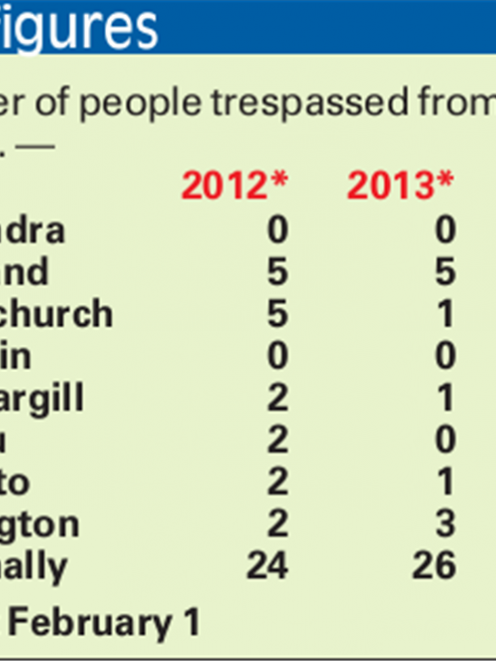 Seven trespass notices were issued to clients of southern ACC offices in the past three years.

Statistics obtained under the Official Information Act show two people were trespassed from ACC's Timaru office at February 1 and two from its Christchurch office. No-one had been trespassed from its Alexandra, Dunedin or Invercargill offices.

During the past three years, four trespass notices were issued to clients of the Timaru office and three to Invercargill clients.

During the past 10 years, ACC assisted one staff member in taking out a restraining order against a client because of harassment.

ACC senior media adviser Stephanie Melville said clients were allowed to express their disappointment with services, staff or outcomes, but not in a way which was threatening to staff.

Before a trespass notice was issued, ACC assessed the risk the client posed to staff, she said.

Trespass notices had a two-year expiry date, but they could be waived earlier if ACC felt the client's behaviour no longer warranted the notice.

ACC had a remote claims unit to deal with clients it felt were a threat to staff. A trespassed client could contact their case manager by email, telephone or mail, she said.

ACC specialist lawyer Peter Sara, of Dunedin, said the numbers suggested trespass notices were being used as a ''last resort'', which was good, because ''it should be a truly exceptional situation for them to do that''.

Some clients could be threatening or difficult to deal with and the low numbers suggested ACC did not issue a trespass notice lightly, he said.