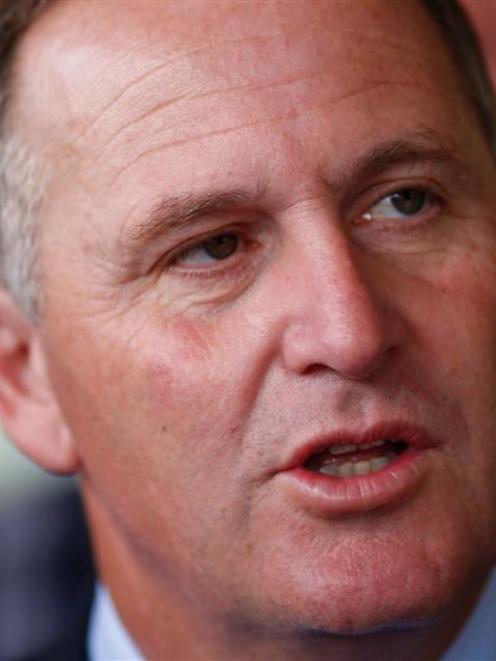 John Key
Prime Minister John Key's touching of a waitress' ponytail came after he let his guard down in a place where he felt comfortable, National MP Judith Collins says.

Ms Collins' defence of her boss came as more examples of him grabbing ponytails and pigtails emerged yesterday, as well as a threat of legal action.

And a Wellington man who said his daughter's friends had their ponytails tugged by the Prime Minister late last year. He told the Herald, "It looks as if this is a thing he does, it's a way of interacting, it seems."

Mr Key is in Turkey for World War I commemorations after earlier apologising to cafe worker Amanda Bailey, 26, who complained he repeatedly touched her ponytail.

Ms Collins said she had a great deal of sympathy for Ms Bailey, who had been put in a difficult position and took the action she deemed necessary.

However, she did not believe there was any ill-intent behind the ponytail pulling.

"The Prime Minister was in a very safe environment from his point of view -- he is very relaxed there.

"He is someone who obviously often has his guard down, and when he is sitting with his wife in a very comfortable environment, his guard has obviously been down. And this is a story because he is the Prime Minister."

However, the Green Party said Mr Key should be judged by the standards that had been the downfall of MPs and state sector leaders.

"I simply cannot imagine a grown man pulling on my ponytail.

"Let alone doing it more than once."

"When it was clearly made known to the Prime Minister he shouldn't be acting in that way, he stopped the behaviour. So I'm not going to be lining up to throw stones."

Mark Blackham of BlacklandPR said his 12-year-old daughter watched Wednesday night's television news and said, "That's what the Prime Minister did at Te Papa to my two friends."

Mr Blackham, who has advised senior politicians from Labour, National and the Greens and the Internet Party, said his daughter had visited Te Papa on a school trip late last year.

He has since blogged about the incident on his political strategy blog, Political Business.

"I guess she was a bit amazed, she was just intrigued that it had happened to her friends as well, she was surprised," Mr Blackham told the Herald.

"I don't think [the friends] were perturbed, it was no big deal ... it looks as if this is a thing he does, it's a way of interacting, it seems.

"I think it puts a bit more perspective on it ... I don't know if it's affectionate or what it is, but it's clearly a thing he does."

In another incident on April 7, 2014, a segment of Campbell Live included a scene of Mr Key pulling a girl's hair at Omaha.

Serial litigant Graham McCready yesterday said he would file a complaint with the Human Rights Commission and take the case to court.

He will file an assault complaint, which carries a maximum penalty of two years imprisonment.

"The gravity of the consequences for Mr Key is why any consideration of the wishes of his victim cannot be taken into account in the decision whether to file the criminal case or not," he said.

"It is simply in the public interest that the criminal proceedings are filed by way of a private prosecution".