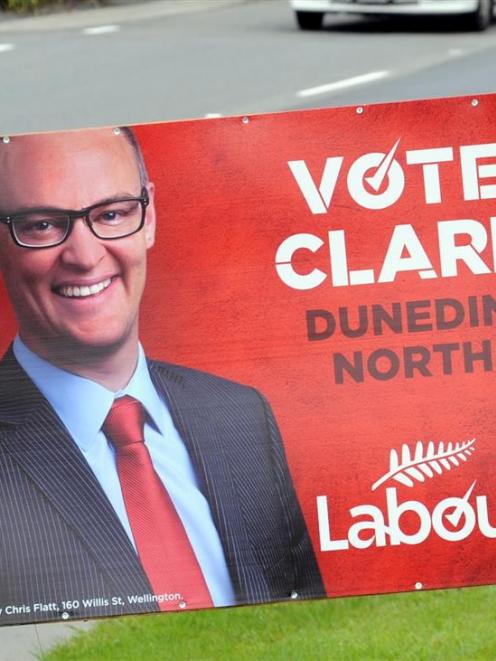 Photos by Peter McIntosh.
Prime Minister John Key's visage will be smiling at voters throughout the country now that election hoardings have started to appear in the lead-up to the November 26 election, writes ODT Political editor Dene Mackenzie.

But if voters want to see Phil Goff's face on a hoarding, they will probably have to visit Mt Roskill, his home electorate.

Labour has been criticised by some bloggers for ignoring Mr Goff in their hoardings. 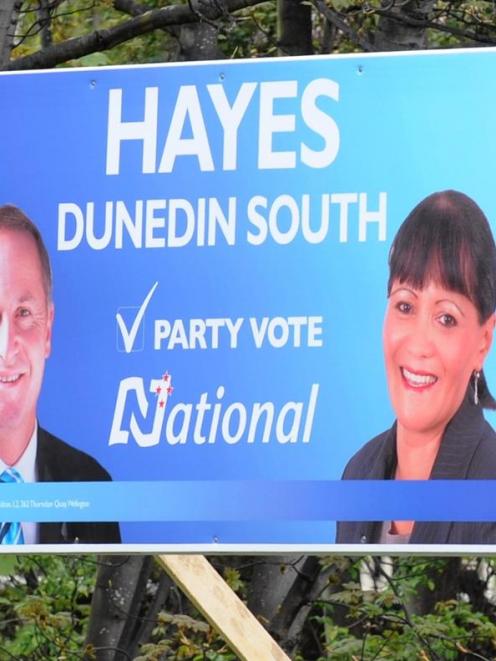 A National candidate's hoarding shared with the Prime Minister and a Labour candidate on his own.
For instance, Dunedin South MP Clare Curran has no hoardings in her electorate featuring Mr Goff. In contrast, her National counterpart, Joanne Hayes, will have several with Mr Key on them, along with the National Party logo.

National is highlighting Mr Key because he is the party's best asset, and candidates, especially those dependent on the list to get in, will want people to tick the National Party list vote to try to get themselves into Parliament.

Being seen with Mr Key is regarded as a major campaign asset by National candidates.

Being with Mr Goff is a liability for Labour candidates.

The One News Colmar Brunton poll released this week had Mr Key with 59% support as preferred prime minister and Mr Goff on 8%.

Labour MPs, already in trouble in Auckland for putting up signs before the official start (and some, like Jacinda Ardern, for breaching size regulations) are distancing themselves deliberately from Mr Goff.

The party signs will show the candidate's photo, a silver fern and a tick to vote Labour.

The MPs believe Mr Goff will hamper their campaigning and want to put as much distance as possible between him and themselves during the campaign.

Other signs feature a call for a $15 an hour minimum wage, the removal of GST from fresh fruit and vegetables and stopping the sale of state-owned assets.

Some of the MPs believe Mr Goff will announce his resignation on election night, leading to the real election for Labour taking place on Sunday, when a new leader will need to be identified.

Labour is also likely to face other hoarding difficulties - its new signs on a black background feature a small silver fern and the Labour logo in the bottom right corner. The sign reads: "When things look black, we are at our best. Go the boys".

It appears the signs went up on Sunday, the day the All Blacks announced Dan Carter was out of the Rugby World Cup with a groin injury.

With Labour complaining about Mr Key spending an hour on talkback radio talking about his cat, Labour can expect criticism for its attempts to link the party with the All Blacks.

Claims Labour was having a "light-hearted dig" at themselves as well showing support for the All Blacks are unlikely to resonate with the voting public.