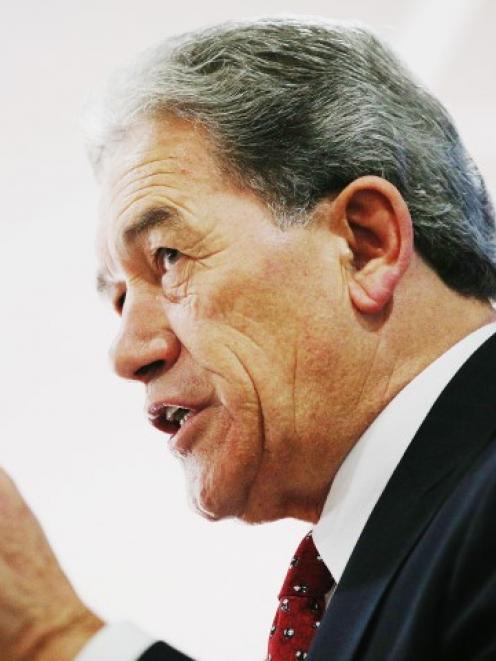 Winston Peters: 'How many times do you have to have that repeated to know that those denials are not worth the air they pass on?' Photo Getty
New Zealand First leader Winston Peters says Judith Collins' credibility is in tatters and her accusations of lying about a plot to potentially roll Prime Minister John Key are hollow.

Mr Peters has sparked a war of words over his claims that an "emissary from someone in Judith Collins' camp" approached him earlier this year to ask if he could work with a Collins-led National Party after the election.

He suggested it was a plot to roll Mr Key, but it prompted an angry response from Ms Collins.

"Winston Peters is wrong. I have never approached him nor have I asked anyone else to approach him," she said.

Mr Key dismissed it as Mr Peters "trying to get himself into the news" and stood by Ms Collins, though he said he would "probably" sack her if the claim were true.

Mr Peters called her response "foolish", and said he was willing to sign an affidavit or even stake his life on the veracity of his claim.

He said Ms Collins had no credibility left after the Oravida saga, her attack on journalist Katie Bradford, her dealings with Whale Oil blogger Cameron Slater and her back-pedalling after wrongly claiming to be cleared by the Privacy Commissioner.

"How many times do you have to have that repeated to know that those denials are not worth the air they pass on?"

Mr Peters would not be drawn on whether the man who approached him was political strategist Simon Lusk, who is one of the central figures of Nicky Hager's book Dirty Politics.

"I never give away sources or others associated with it, for very sound reasons. No one would trust me.

"I've never worked with Simon Lusk. Do I know who he is and have I met him? Yes, like tens of thousands of New Zealanders, he's an acquaintance."

Correspondence between Mr Lusk and Mr Slater, published in Dirty Politics, claims to show a strong preference for Judith Collins to eventually be party leader.

"That's why I'm keen to have her as leader, our side will learn to fight properly," one email allegedly from Mr Lusk in 2011 said.

"We need to talk to Crusher about what happens if Winston gets back in and we end up in power," Mr Lusk allegedly said in another email in 2011.

Mr Lusk did not respond to requests for comment.

Mr Key said he believed Ms Collins when she said it had not happened.

"I suspect Winston Peters is trying to get himself into the news. We don't give it any credibility at all."

He said it had not changed National's willingness to work with Mr Peters if New Zealand First was needed for a coalition.

The claims follow polls that show a majority in favour of Ms Collins' resignation for her part in the Dirty Politics scandal. Ms Collins has admitted passing on the details of public servant Simon Pleasants to Mr Slater, whose subsequent blogposts abused him.