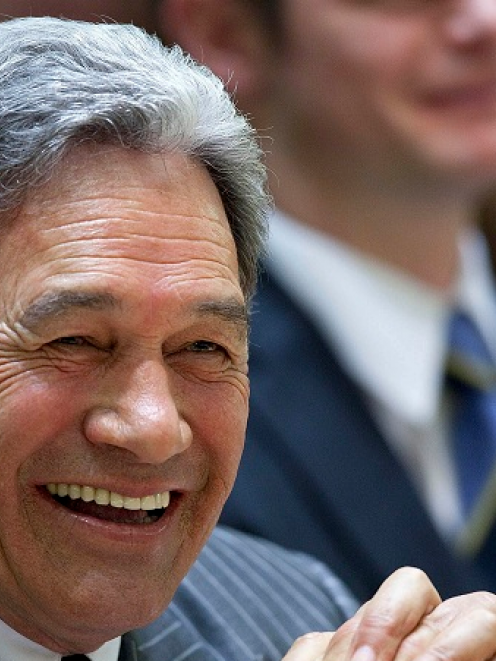 Winston Peters
Prime Minister John Key and Labour leader David Cunliffe are both confident of forming a government after Saturday's election but the spectre of two other players overshadowed their final debate last night.

Both men made a good fist of getting their messages out to voters, despite being talked over by moderator Mike Hosking and talking over each other.

Mr Cunliffe looked more assured and confident than at any other time in the campaign but Mr Key was also in his best form.

It was an entertaining and gripping contest which would please supporters from all sides.

However, New Zealand First leader Winston Peters and Internet Mana funder Kim Dotcom played an integral part in the cut and thrust of a rapid-fire debate of about 20 minutes, excluding the ad breaks on the One News Leaders' Debate.

As the session drew to a close, both leaders were asked if they had any regrets from the campaign.

Mr Cunliffe said he had no personal regrets but his one regret on behalf of New Zealanders was the amount of static from outsiders which took airtime away from Labour talking about its policies.

Mr Key said his regret was he had no chance to have the discussions with New Zealanders on the issues that mattered.

''Too much time was spent on one individual and on issues New Zealanders don't care about.''

On spying, Mr Key again said there was no mass surveillance being carried out on New Zealanders, and the Five Eyes agreement between New Zealand, Australia, the United States, Canada and Great Britain meant the partners did not spy on each other.

He did not rule out the US looking at some issues concerning some New Zealanders of interest.

''I know a fair bit of what is going on. I am reasonably know- ledgeable.''

But he would not be drawn on what was happening, saying there was a big difference between knowing and telling people the things spy agencies were doing to protect New Zealanders.

The debate heated up quickly and considerably once the two leaders were asked about forming the next government.

Mr Cunliffe was adamant the TV3 poll out last night gave enough support to Labour, the Greens and NZ First to form a government, without needing Internet Mana.

During his assurances on the poll, which showed the three parties had only 47.1% (60 MPs) support - not enough to govern - Mr Key constantly interjected that Mr Cunliffe was incorrect.

National, along with one MP from Act New Zealand and United Future, would have 58 seats in Parliament and would need either the Maori Party or NZ First for support.

Neither man would allow Mr Peters to be prime minister, there was coyness on whether he would be deputy prime minister and Mr Peters being speaker was ruled out by Labour while Mr Key said everything was up for negotiation after Saturday.

National had many options available to it, he said.

One of them, on last night's polling, could be the Conservatives polling 5% and taking six MPs to Parliament. The party was on 4.9%.

Mr Cunliffe attacked ''the weirdos on the Right'', which included Act, United Future and the Conservatives.

One thing Mr Cunliffe did say without dispute: the election result was on a knife edge, very close. But, on the last poll, National will get the first chance to form a government.