People mourn next to memorial candles and flowers at the Market Square in Turku. Photo: Reuters

A Moroccan man who was arrested for killing two women in a knife rampage was an asylum seeker who appeared to have targeted women in Finland's first terrorism-related attack, police and a Red Cross official said on Saturday (local time).

The 18-year-old suspect, arrested in the city of Turku following Friday's attack in which eight other people - six of them women - were wounded, arrived in Finland last year, police said. Police shot the suspect in the leg before his arrest.

Police also arrested four other Moroccan men over possible links to him and issued an international arrest warrant for a sixth Moroccan, they said.

Finnish broadcaster MTV, citing an unnamed source, said the main suspect had been denied asylum in Finland, although police said only he had been "part of the asylum process".

The manager of the Red Cross reception centre in Turku, where flags flew at half-mast on Saturday, told Reuters the suspect was an asylum seeker. "I cannot comment on the application's outcome," Heimo Nurmi said.

He said police visited the centre on Friday and had detained several people. "The arrests were non-violent," he added.

It was not clear if the attack was in any way linked to the suspect's asylum application.

The case marks the first suspected terror attack in Finland, where violent crime is relatively rare. Police said they were investigating possible links to Thursday's deadly van attack in the Spanish city of Barcelona.

"The suspect's profile is similar to that of several other recent radical Islamist terror attacks that have taken place in Europe," Director Antti Pelttari from the Finnish Security Intelligence Service told a news conference.

Both of those killed in the Turku attack, and six of the eight who were wounded, were women, the police said. The two who died were Finns, and an Italian and two Swedish citizens were among the injured.

"It seems that the suspect chose women as his targets, because the men who were wounded were injured when they tried to help, or prevent the attacks," said Crista Granroth from the National Bureau of Investigation.

"The act was cowardly ... we have been afraid of this and we have prepared for this. We are not an island anymore, the whole of Europe is affected," Prime Minister Juha Sipila said. 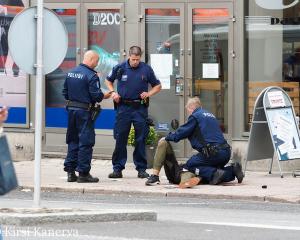