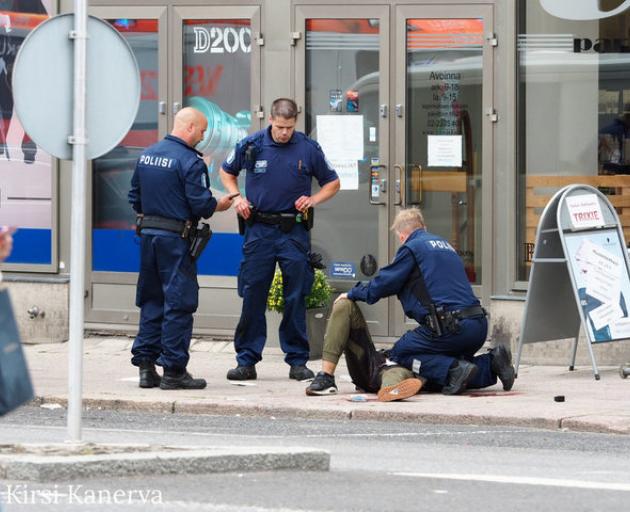 The suspect lies on the ground surrounded by police officers at the Market Square where several people were stabbed, in Turku, Finland. Photo: Reauters via Kirsi Kanerva

A man with a knife killed two people and wounded eight others in a stabbing rampage in a market square in the Finnish city of Turku on Friday (local time), police said.

Police shot the suspected attacker in the leg and arrested him. They said they had yet to establish the identity of the man who was of foreign origin, or his motive.

A witness told Reuters she had seen a man stabbing a woman and other people sobbing at what they had seen after running away in terror.

Police warned people to stay away from the city and reinforced security nationwide, with increased patrols and more surveillance, in case more people were involved. People were allowed to return to the city centre a few hours later.

"At this stage, there is only one suspect and we are investigating whether there are more people involved ... but it looks likely (he was alone)," Markus Laine from the National Bureau of Investigation said.

"For now we do not investigate this (as a terrorist attack) but the possibility has not been ruled out," he told a news conference.

Police said they would hold the next news conference in Turku on Saturday at 1100 GMT.

A woman puts candle at the Market Square where several people were stabbed, in Turku. Photo: Reuters

People laid candles and flowers at the scene of the attack in the evening.

Laura Laine, who saw the stabbing from a nearby outdoor cafe, also returned to the square.

"First thing we heard was a young woman, screaming like crazy. I thought it's just kids having fun ... but then people started to move around and I saw a man with a knife in his hand, stabbing a woman," she told Reuters.

"Then a person ran towards us shouting 'he has a knife', and everybody from the terrace ran inside."

"Next, a woman came in to the cafe. She was crying hysterically, down on her knees, saying someone's neck has been slashed open."

The eight wounded were taken to hospital, police said.

"The act is utterly deplorable and an exceptionally serious violent offence in the Finnish context – it is deeply shocking for us all," Prime Minister Juha Sipila said in a statement after holding a conference call with his government.

Finland is usually peaceful but the Security Intelligence Service raised the terrorism threat level in June to elevated from low, saying it had become aware of terrorism-related plans in Finland.

The government has grown more concerned about attacks, partly since an Uzbek man killed four people in neighbouring Sweden in April by driving a hijacked truck into crowd in central Stockholm.

On Thursday, a suspected Islamist militant drove a van into crowds in Barcelona, Spain, killing 13 people and wounding scores of others.

European Commission President Jean-Claude Juncker said: "It is with great concern that I have learnt of the violent attacks in Turku, Finland. While details are still emerging, we strongly condemn this unprovoked attack which comes only 24 hours after the horror that unfolded in Spain." 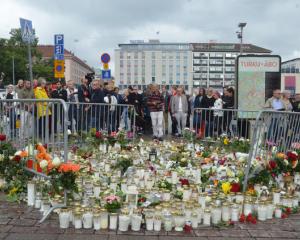