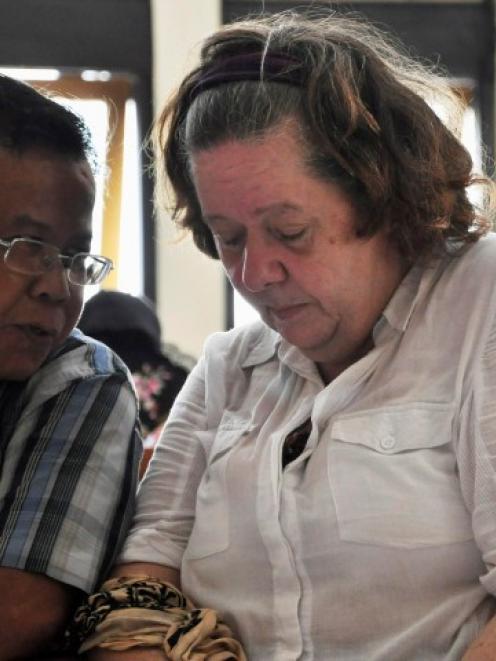 Lindsay Sandiford listens to her translator during her trial in Denpasar in Bali. REUTERS/Stringer
An Indonesian court has sentenced a middle-aged British woman to death for smuggling cocaine worth more than $US2.5 million into the resort island of Bali.

Lindsay Sandiford, 56, was found guilty of smuggling 4.8 kg (11 lbs) of the drug hidden in the lining of her suitcase on a flight from Bangkok in May.

Sandiford, who was accompanied by a translator, covered her face several times with a head scarf as she listened to the verdict being read out.

It was not clear if she would appeal. Prosecutors had initially sought a jail term for Sandiford, taking into account her age.

Sandiford claimed she had smuggled the drugs only because one of her co-accused, Julian Ponder, had threatened to kill her son.

She helped police by allowing them to watch her deliver the drugs, and leading them to the co-accused.

But I Gusti Agung Bagus Wijaya Adi, a member of the three-judge panel at the Denpasar District Court, said ''aggravating circumstances'' justified the death penalty.

Sandiford had refused to admit the cocaine had belonged to her (she said it belonged to Ponder), she had given ''twisted and convoluted testimony'', and had shown no remorse, he said.

Indonesia has some of the strictest drug trafficking laws in the world, with many foreigners languishing in jail on Bali.

The so-called Bali Nine were arrested in 2005 and found guilty of attempting to smuggle more than 8 kg of heroin into Australia. Their sentences ranged from 15 years' jail to death.

$30m of meth found in handbags