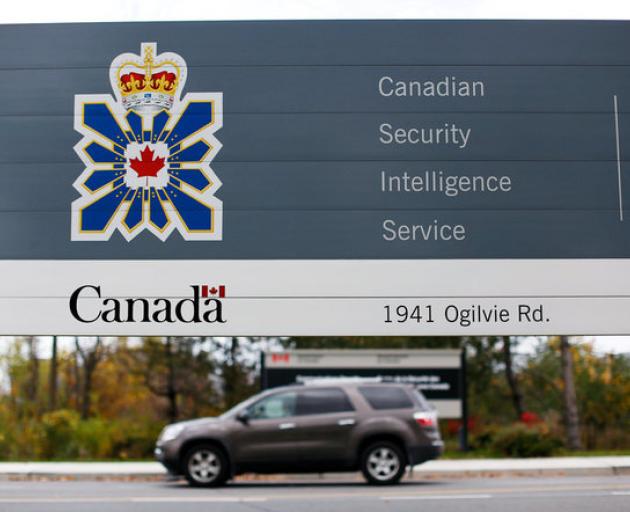 CSIS, which employs 3300 people, has suffered a number of problems since it was created in 1984. Last November, a court declared it had illegally kept data collected during investigations and threatened sanctions. Photo: Reuters

Five agents and analysts at Canada's spy service are suing their bosses with allegations of homophobia, racism and Islamophobia, the latest high-profile accusations of bad behaviour to hit Canadian security forces.

The group of employees filed a C$35 million ($NZ38 million)lawsuit on Thursday (local time) against the Canadian Security Intelligence Service (CSIS), saying they had been bullied for more than a decade.

"CSIS is a workplace rife with discrimination, harassment, bullying and abuse of authority, in the which the tone set by management, namely to mock, abuse, humiliate and threaten employees, has permeated the workforce," said the lawsuit.

The Canadian armed forces have experienced similar issues for years. In 2015, after an investigation uncovered widespread sexual misconduct and hostility towards minorities and women, the new chief of the defense staff said such behaviour "must stop now."

"CSIS does not tolerate harassment, discrimination or bullying under any circumstances," he said in a statement on Friday, while declining to comment on the specific allegations.

CSIS, which employs 3300 people, has suffered a number of problems since it was created in 1984. Last November, a court declared it had illegally kept data collected during investigations and threatened sanctions.

Of the five employees who are suing the agency, three are Muslim, one is gay and one is black.

The gay agent, who has a Muslim partner, stated his manager sent him an e-mail in 2015 that said "careful your Muslim in-laws don't behead you in your sleep for being homo."

The group said superiors regularly made derogatory comments, including that all Muslims were "blood thirsty murderers" or "terrorists."

Richard Fadden, who served as head of CSIS from 2009 to 2013, said he had not had the sense the agency suffered from such problems when he was in charge.

"We could not generalise that all Muslims, or all members of any group, were potential terrorists because we had to identify the real terrorists," he said in a phone interview.

"If some of the allegations are true they need to be dealt with quickly."