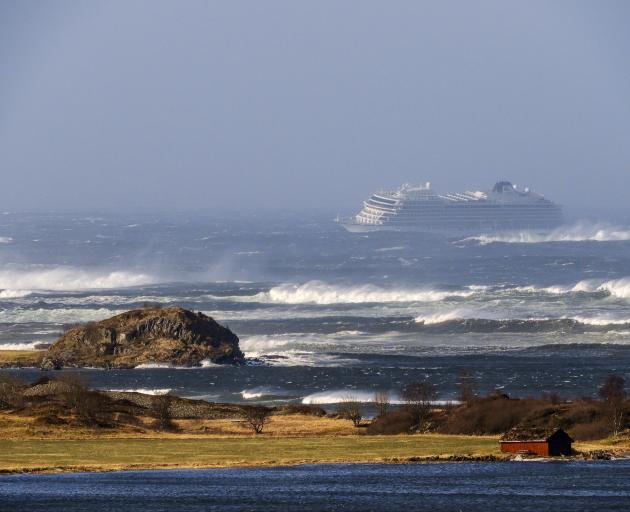 The cruise ship Viking Sky as it drifts after sending a Mayday signal because of engine failure in windy conditions near Hustadvika, off the west coast of Norway. Photo: Odd Roar Lange / NTB scanpix via AP
Norwegian rescue authorities say a freighter has experienced an engine seizure in the same stormy Hustadsvika Bay region off western Norway where hundreds of people are being winched off by helicopter from the ailing Viking Sky cruise ship.

Authorities say they have had to divert two of the five helicopters rescuing 1300 passengers and crew from the cruise ship to help the Hagland Captain cargo vessel's crew of nine in the storm.

Both boats are trying to avoid being dashed on the rocky coast. The cruise ship is moored between the western Norwegian cities of Alesund and Trondheim.

People are being winched off one by one, with one passenger saying she was terrified as she was buffeted by high winds.

Rescue workers say it will take hours to evacuate all those on the cruise ship.

The cruise ship had engine problems and sent a mayday call off Norway's western coast on Saturday as it desperately tried to avoid being grounded on the rocky coast.

The Norwegian newspaper VG said the Viking Sky cruise ship ran into propulsion problems as bad weather hit Norway's coastal regions on Saturday and it started drifting toward land. Police in the western county of Moere og Romsdal said the crew, fearing the ship would run aground, managed to anchor in Hustadsvika Bay, between the western Norwegian cities of Alesund and Trondheim, so the evacuations could take place. 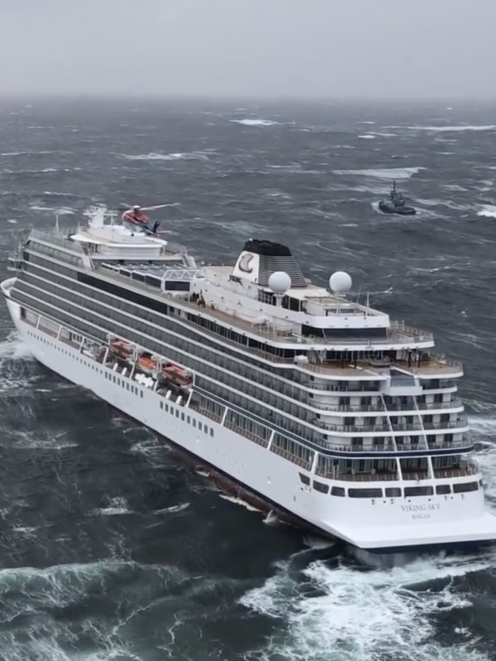 Rescue teams with helicopters and boats were sent to evacuate the cruise ship under extremely difficult circumstances. Norwegian media reported gusts up to 38 knots and waves over 8 meters. The area is known for its rough, frigid waters.

Norwegian public broadcaster NRK said the Viking Sky's evacuation was a slow and dangerous process, as passengers needed to be hoisted from the cruise ship to the five available helicopters one by one. By 6pm, some 100 people had been rescued and were being taken to a nearby sports hall.

Later, reports emerged that a cargo ship with nine crew members was in trouble nearby, and the local Norwegian rescue service diverted two of the helicopters to that rescue.

Authorities told NRK that a strong storm with high waves was preventing rescue workers from using life boats or other vessels in taking passengers ashore.

"It's a demanding exercise, because they (passengers) have to hang in the air under a helicopter and there's a very, very strong wind," witness Odd Roar Lange told NRK at the site.

Video and photos from people on the ship showed it heaving, with chairs and other furniture dangerously rolling from side to side. Passengers were suited up in orange life vests but the waves broke some windows and water flowed over the feet of some passengers.

Passengers rescued from the Viking Sky cruise ship are helped from a helicopter in Hustadvika, Norway. Photo: Odd Roar Lange/NTB Scanpix via AP

According to the cruisemapper.com website, the Viking Sky was on a 12-day trip that began March 14 in the western Norwegian city of Bergen.

The ship was visiting the Norwegian towns and cities of Narvik, Alta, Tromso, Bodo and Stavanger before its scheduled arrival Tuesday in the British port of Tilbury on the River Thames.

The Viking Sky, a vessel with gross tonnage of 47,800, was delivered in 2017 to operator Viking Ocean Cruises.