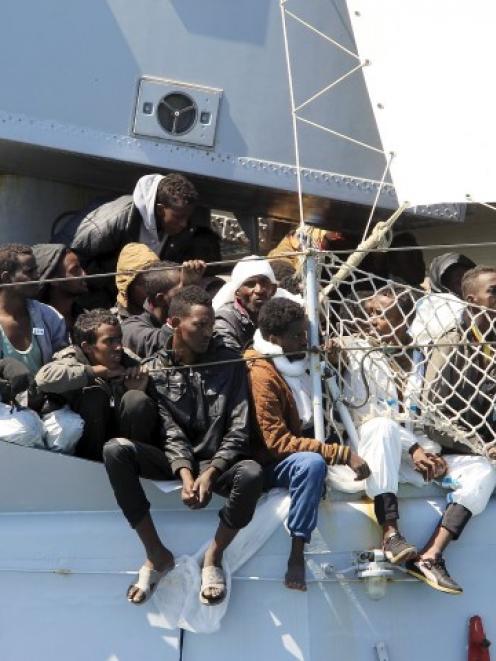 Migrants on board the Italian Navy ship Chimera wait to be disembarked in the southern harbour of Salerno. REUTERS/Ciro De Luca
European Union leaders who decided last year to halt the rescue of migrants trying to cross the Mediterranean will reverse their decision at a summit hastily convened after nearly 2,000 people died at sea.

Public outrage over the deaths peaked this week after up to 900 migrants died last Sunday when their boat sank on its way to Europe from Libya.

That has raised the death toll to around 1,800 so far this year, compared to fewer than 100 who died before the end of April last year, when a similar number attempted the journey.

Italy shut down the mission that saved the lives of more than 100,000 migrants last year because other EU countries refused to pay for it. It was replaced with a smaller EU scheme whose main focus is to patrol the bloc's borders, after countries argued that saving migrants encouraged more to come.

The peak migration season of late spring and summer has barely begun, with international organisations estimating tens of thousands of African and Asian migrants likely to attempt the journey per month, mostly from Libya. Last year the death toll eventually reached 3,200.

The leaders are likely to agree in Brussels to double the cash and equipment available to two EU border patrol missions in the Mediterranean, a senior EU diplomat said.

Their area of operations, while at the discretion of commanders on the ground, would also probably be extended closer to the North African coast, not just waters near EU shores. Once patrolling in the area, maritime law obliges vessels to rescue people in trouble.

"On Thursday our overriding priority is to prevent more people from dying at sea," European Council President Donald Tusk said in his invitation letter to the leaders.

In Valetta, capital of Malta, a memorial service was held for the 24 bodies recovered from Sunday's disaster, when a triple-deck fishing boat capsized and sank near Libya with hundreds of people trapped in its hold.

Only 28 people were rescued. The vast majority were locked below decks, their bodies never found. The captain has been arrested in Italy on suspicion of multiple homicide, people smuggling and causing a shipwreck.

A room in Valetta's Mater Dei Hospital morgue was blanketed with flowers sent mostly by local residents. A note attached to one bouquet read: "R.I.P. brothers and sisters, you matter".

"We proceeded out at sea with the hope of course to save as many people as we could but unfortunately we didn't arrive quite in time to save the migrants," said visibly moved Maltese Navy Lieutenant Mark Merceica, who attended the memorial.

"We were really disappointed and you could feel this through the entire crew, we were really hoping to arrive in time."

The EU has struggled for years to forge an effective joint strategy to handle migrants fleeing war and turmoil in Africa and the Middle East.

Many European politicians have acknowledged this week that last year's decision not to replace the Italian search and rescue operation was a mistake.

"There was a view that the presence of rescue ships encouraged people to risk the crossing," British Deputy Prime Minister Nick Clegg wrote in the Guardian newspaper on Wednesday. "That judgment now looks to have been wrong."

Human rights groups warned at the time that the EU decision would increase deaths. They now say action must be taken to reverse it.

"The stakes are very high on Thursday. EU heads of state have the responsibility of the region's human rights credibility on their shoulders and they need to take firm action to save lives," Iverna McGowan, head of rights group Amnesty International's Brussels office, told a news conference.

Prime Minister Matteo Renzi of Italy, which has borne the brunt of caring for the migrants, wants other EU countries to do more to fund efforts to rescue and settle those who make it across.

Many EU countries still believe search and rescue operations alone will not solve the problem, and more must be done to fight traffickers, who have taken advantage of lawlessness in Libya to set up operations that spirited 170,000 migrants across the sea last year.

One proposal the leaders will discuss is a military and civilian mission to capture and destroy the traffickers' boats.

"We know where the boats are, where the smugglers gather together the people who are fleeing," Italian Defence Minister Roberta Pinotti told Italy's SkyTG24 television.

EU officials have drawn comparisons with operations to crack down on Somali pirates.

"We are determined to destroy their business model," one senior EU official said, saying states would make "surgical", intelligence-based operations once legal issues, including a possible U.N. mandate, had been addressed.

The leaders will also discuss a pilot project to resettle 5,000 to 10,000 refugees from Mediterranean countries to other EU states, the senior diplomat said. The United Nations estimates 36,000 have made the voyage so far this year.

On Wednesday, Italy's coast guard said it had rescued 220 migrants on Wednesday taken from two large rubber boats about 40 miles from the Libyan coast.

Another 545, most of them without even a pair of shoes, were taken to Salerno, just south of Naples. A further 446, mostly of Egyptian, Syrian, Sudanese, Somali and Eritrean origin, arrived in eastern Sicily after being rescued from a fishing boat.