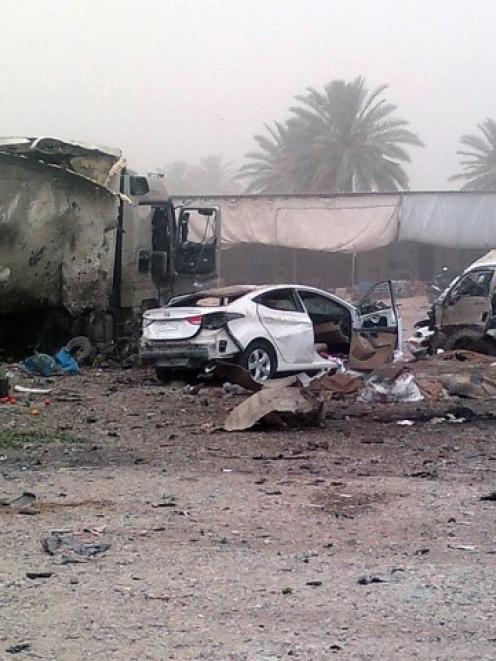 Civilians gather at the site of a car bomb attack at Jadidat al-Shatt in Diyala province, 40km north of Baghdad. REUTERS/Stringer
Insurgents have struck cities across Iraq with car bombs, suicide attacks and gun battles, killing more than 70 people in worsening sectarian violence.

No group claimed responsibility for the day-long attacks, most of them in northern Iraq, but officials blame much of the violence that has killed nearly 2,000 people since April on Sunni Islamist insurgents linked to al Qaeda's local wing.

The bloodshed has accompanied rising political tensions between Iraq's majority Shi'ite leaders and the Sunni community, who believe they have been marginalised since the fall of Saddam Hussein after the 2003 U.S.-led invasion.

Monday's attacks earlier targeted markets in two northern Iraqi towns. But later insurgents hit at security forces, including an assault involving suicide bombers and rockets on police headquarters in the northern city of Mosul that killed 24, many of them police and soldiers.

The recent monthly death tolls have been the worst since inter-communal bloodletting five years ago that killed tens of thousands, partitioned Baghdad into districts based on religious sect and drove Iraq to the edge of widescale civil war.

The increasingly sectarian conflict in neighbouring Syria, where Shi'ite Iran and the region's Sunni Gulf powers are backing opposing sides, has also put pressure on Iraq's own fragile inter-communal and ethnic balance.