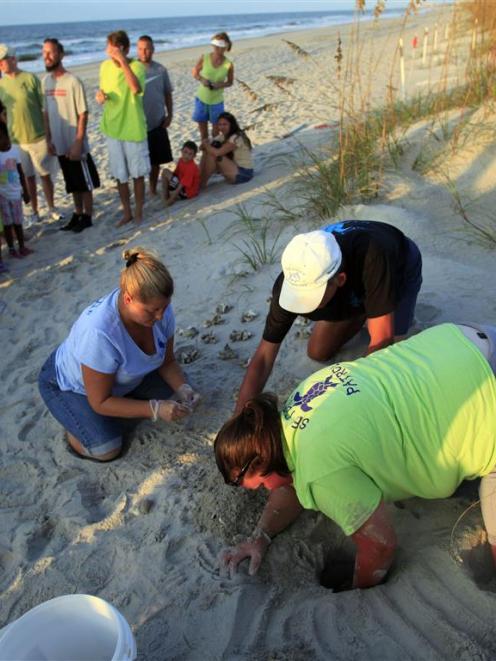 Turtle volunteers Marianne Glaze, Don Pease and Amanda Jenkins take an inventory of a hatched sea turtle nest. REUTERS/Randall Hill/Files
Endangered sea turtles are nesting in record numbers along the southeast Atlantic Coast this summer, the US Fish and Wildlife Service said today, although they still face environmental threats from ocean pollution and a possible rise in sea levels.

Officials saw the nesting gains as a sign that 35 years of conservation efforts are paying off.

Last year, nesting numbers were down for green sea turtles. Wildlife officials said they suspected that cold weather in March discouraged the turtles that nest earlier than other sea turtles. Their nesting season ends in November.

The number of female nesting green sea turtles is estimated to have dropped by about 50 percent in the past 100 to 150 years, scientists say, although that trend may have been at least temporarily halted by the conservation efforts.

Add in the far larger and equally endangered loggerhead and leatherback turtles, and the 3 1/2-mile refuge nesting area on Jupiter Island holds about 2,500 turtle nests, he said.

"You can hardly walk on the beach without coming close to a nest," Miller said.

It is the highest nest count there since 1978, the year the species became federally protected, and nest counts have been climbing for the last three years, refuge manager Sarah Dawsey said on Friday.

The number of loggerhead nests this summer is above average in Florida, Georgia, South Carolina and North Carolina, said Ann Marie Lauritsen, acting national sea turtle coordinator for the US Fish and Wildlife Service.

Researchers can't be sure from year to year how warm water, heavy rains, cold spring weather or other environmental factors affect the turtles, which migrate thousands of miles to return at maturity to lay their eggs in the same area where they hatched, officials said.

But they said they're encouraged that decades of federal protection and conservation efforts, along with offshore protections by fisheries, are paying off.

"It takes 30 to 35 years for these turtles to reach maturity," Dawsey said. "We're just now seeing those turtles who were first protected in 1978 coming back to nest," Dawsey said.

Sea turtles are still threatened by coastal lighting, which draws hatchlings inland instead of toward the ocean, Lauritsen said. Boat traffic also poses dangers, she added.

"All the gains we're having now could be lost later to a sea level rise, which would take away nesting habitat, or if we continue to see increases in ocean pollution," Miller said.

A study under way at the University of Georgia, with data from coastal North Carolina, Georgia and Florida, will track the DNA of mother-daughter loggerhead turtle pairs, Dawsey said. That will give scientists a clearer picture of just how the species is faring over time, she said.

The Fish and Wildlife Service, along with the National Oceanic and Atmospheric Administration, is conducting a global status report on green sea turtles, Lauritsen said.