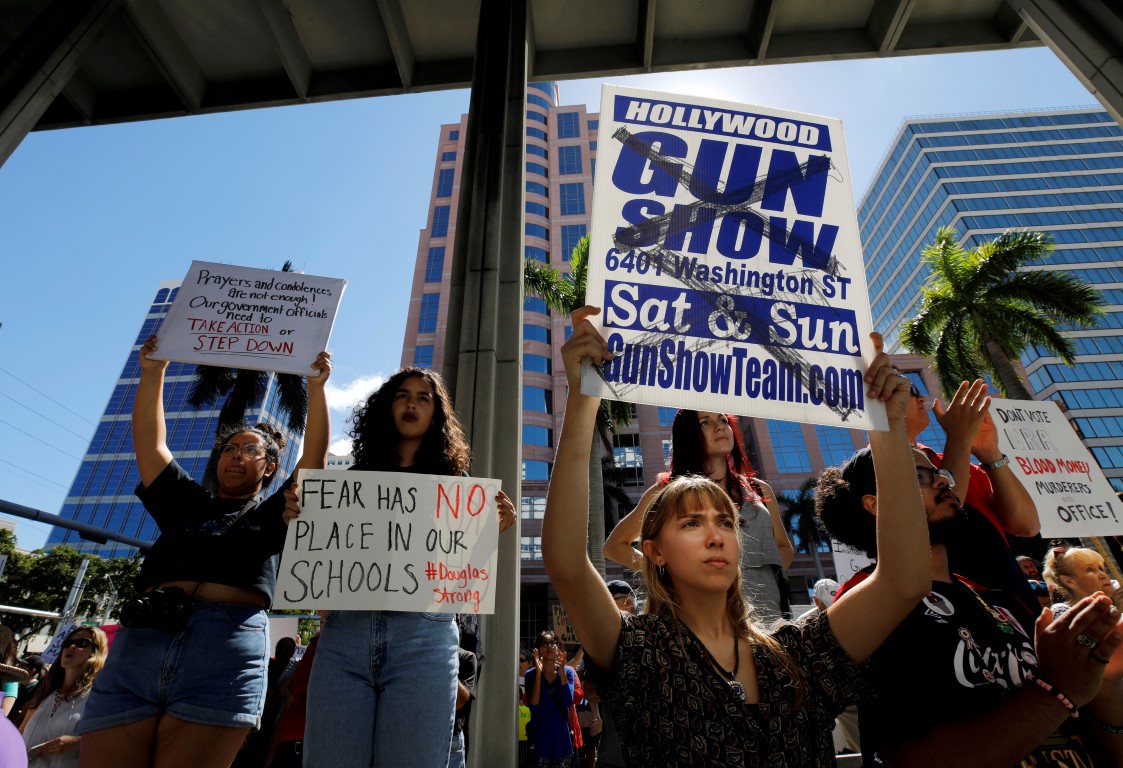 Protesters hold placards at a rally calling for more gun control in the wake of the shooting at Marjory Stoneman Douglas High School, in Fort Lauderdale, Florida. Photo: Reuters
President Donald Trump attacked the FBI and lawmakers probing alleged Russian meddling in the 2016 presidential election and said an excessive focus on Russia led federal investigators to miss signs that could have prevented a deadly mass shooting a Florida high school.

In a series of tweets over the weekend sent from his Mar-a-Lago estate in Florida, Trump said congressional investigations and political "hatred" showed that Russia had succeeded in sowing "discord, disruption and chaos" in the United States.

He accused his predecessor, President Barack Obama, of failing to do enough to stop Russian election interference.

Very sad that the FBI missed all of the many signals sent out by the Florida school shooter. This is not acceptable. They are spending too much time trying to prove Russian collusion with the Trump campaign - there is no collusion. Get back to the basics and make us all proud!— Donald J. Trump (@realDonaldTrump) February 18, 2018

"They are laughing their asses off in Moscow," Trump tweeted on Sunday morning (local time).

The tweets came after Friday's announcement that special counsel Robert Mueller was charging 13 Russians and three Russian companies with a conspiracy to tamper in the 2016 US election.

US spy agencies concluded more than a year ago that Russia used hacking and propaganda to try to tilt the election in favor of Trump. Russian President Vladimir Putin has repeatedly denied this, and Trump has said he believes him.

In a tweet on Saturday night, Trump criticized the Federal Bureau of Investigation for missing warning signs in the case of Nikolas Cruz, 19, who is charged with killing 17 people on Wednesday at Marjory Stoneman Douglas High School in Parkland, a Fort Lauderdale suburb.

"Very sad that the FBI missed all of the many signals sent out by the Florida school shooter. This is not acceptable," Trump wrote. "They are spending too much time trying to prove Russian collusion with the Trump campaign - there is no collusion," he added.

The FBI acknowledged on Friday that it failed to investigate a warning that Cruz possessed a gun and the desire to kill.

Former Deputy Attorney General Sally Yates expressed outrage at Trump's suggestion that the FBI was too focused on the Russia probe to chase leads that might have prevented the massacre.

"Our president uses the tragedy to attack the investigation of a foreign adversary's interference in our democracy. Shameful," Yates wrote on Twitter.

In a Sunday morning tweet, Trump belittled Representative Adam Schiff, the ranking Democrat on the House intelligence committee that is investigating Russia's actions, labeling him a leaking "monster."

Several lawmakers rejected Trump's linking of the FBI's missteps in preventing the shooting to the Russia probe.

"So many folks in the FBI are doing all that they can to keep us safe. The reality of it is, is that they are two separate issues," Republican Senator Tim Scott said on the CBS "Face the Nation" program.

After Mueller's indictment was made public on Friday, Trump said it backed up his assertion that there was no collusion between his campaign and Russia.

The indictment did not address whether anyone from the Trump campaign coordinated or worked with Russians. Mueller's broader probe is ongoing.

"It wasn't designed to be able to clear everything on the investigation," Republican Senator James Lankford said on the NBC "Meet the Press" program.

"It was designed to say it was very clear these 13 individuals in this set of companies were trying to interfere in our election," said Lankford, who sits on the Senate Intelligence Committee.

Schiff, speaking on CNN's "State of the Union" program, said details of the Mueller indictment provide "overwhelming and unequivocal" evidence of the threat from Russian interference. He said the indictments countered Trump's frequent comments that the Russia investigation is a "hoax."

"This is a president who claims vindication anytime someone sneezes," Schiff said.