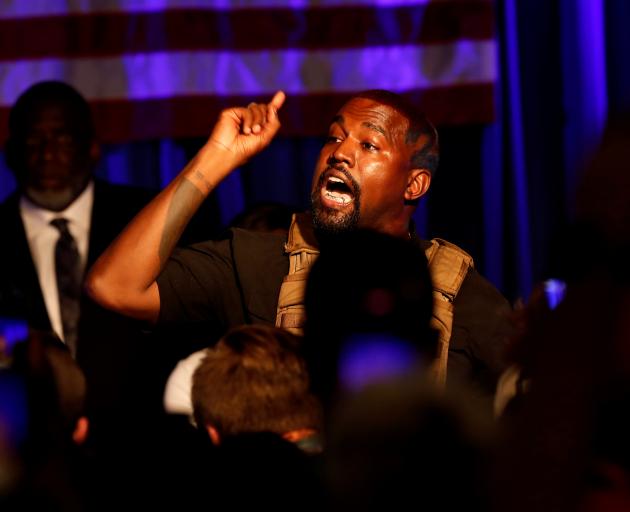 Kanye West at his first rally in support of his presidential bid in North Charleston, South Carolina on July 19. Photo: Reuters
Rapper Kanye West has posted a series of tweets claiming his wife was trying to have him locked up on medical grounds, comparing himself to Nelson Mandela and suggesting the movie Get Out was based on his own life.

Monday's late-night flurry of activity on West's official Twitter account - the bulk of which was deleted a few hours later - came a day after he launched his US presidential campaign with a rambling rally in Charleston, South Carolina.

At that event, he tearfully referenced a decision he said he made with wife Kim Kardashian not to abort a pregnancy.

"Kim was trying to fly to Wyoming with a doctor to lock me up like on the movie Get Out because I cried about saving my daughters life yesterday," West said in one of the tweets that was later deleted.

"If I get locked up like Mandela Ya’ll will know why," he wrote in another tweet, also subsequently deleted, referencing the man who became South Africa's first Black president after being imprisoned for nearly three decades under apartheid.

In other tweets, later deleted, West appealed directly to Kardashian and her mother, Kris Jenner, to contact him at his ranch in Wyoming.

West's record company UMusic and a representative for Kardashian and Jenner did not immediately respond to emails seeking comment.

West (43), a former supporter of President Donald Trump, has left voters befuddled over whether his campaign is genuine or a publicity stunt to help sell albums or merchandise.

He later tweeted that his new album, DONDA, would be released on Friday.

West referenced Get Out, a horror film about race relations, in a few of the tweets: "Everybody knows the movie get out is about me."

Several Twitter followers asked the rapper if he was well.

In response to a tweet asking him to "Save Kanye", Tesla chief executive officer Elon Musk tweeted: "We talked about an hour ago. He seems fine."