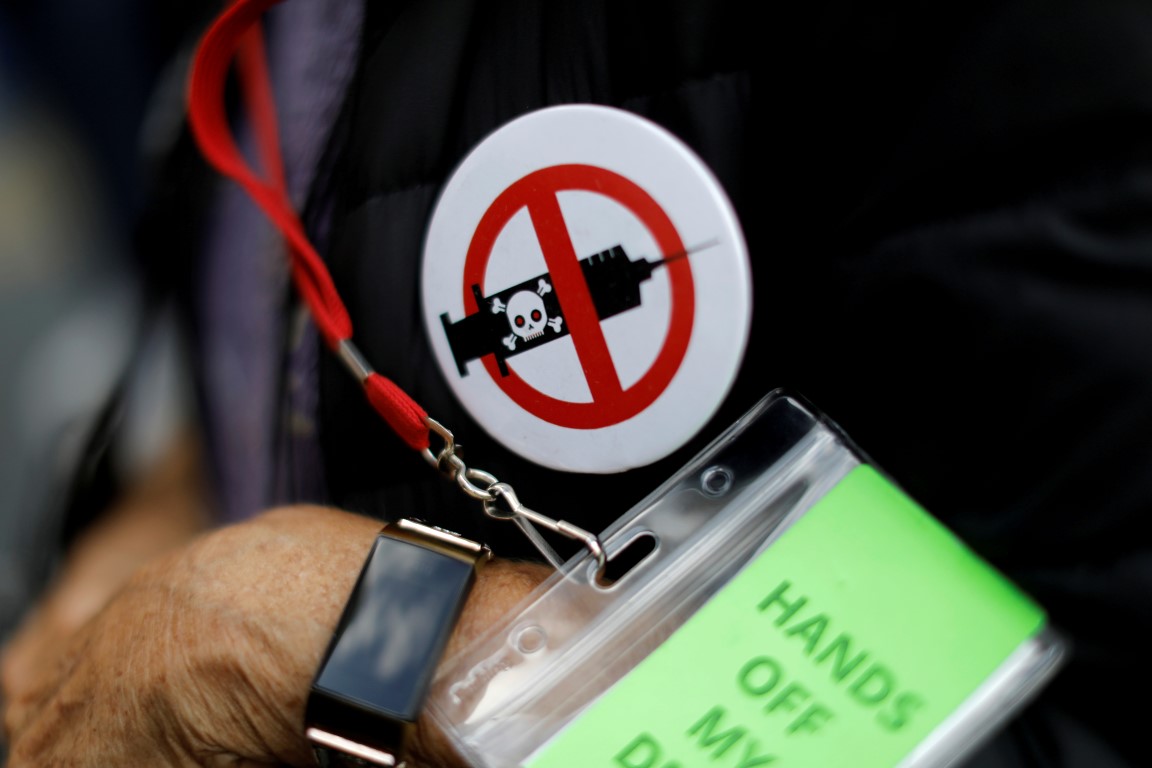 A man with an anti-vaccine badge takes part in a protest in Manhattan against New York City-mandated Covid-19 vaccines. Photo Reuters
A US judge has ruled that New York state cannot impose a Covid-19 vaccine mandate on healthcare workers without allowing for religious exemption requests.

The decision by US District Judge David Hurd in Albany, New York prevents the state from interfering with religious exemptions requests.

Seventeen workers sued over the mandate, alleging their employer revoked an exemption or refused to consider it because of the state's emergency vaccine requirement, which was announced on August 26.

The ruling provides a test case as vaccine opponents gear up to fight plans to be unveiled soon by the Biden administration to extend Covid-19 vaccine requirements to tens of millions of unvaccinated Americans.

New York's Department of Health on August 26 ordered healthcare professionals to be vaccinated by September 27 and the order did not allow for the customary religious exemptions.

The plan was challenged by a group of healthcare workers who said they opposed Covid-19 vaccines because some vaccines were developed from cell lines of aborted foetuses. The workers sued using pseudonyms because they said they feared being vilified in the media and because they shared sensitive health information in their lawsuit.

The employees argued that by granting medical exemptions, the state and healthcare companies were treating those with religious objections to vaccines less favourably, violating the US Constitution's equal protection clause.

Earlier, Hurd ordered on September 20 that healthcare companies could not deny requests for religious exemptions until he had ruled on the request for an injunction.

Vaccines have become highly politicized in the United States, where less than 60% of Americans are vaccinated, well short of the initial goals of the Biden administration.

At least 24 states have imposed vaccine requirements on workers, usually in healthcare.