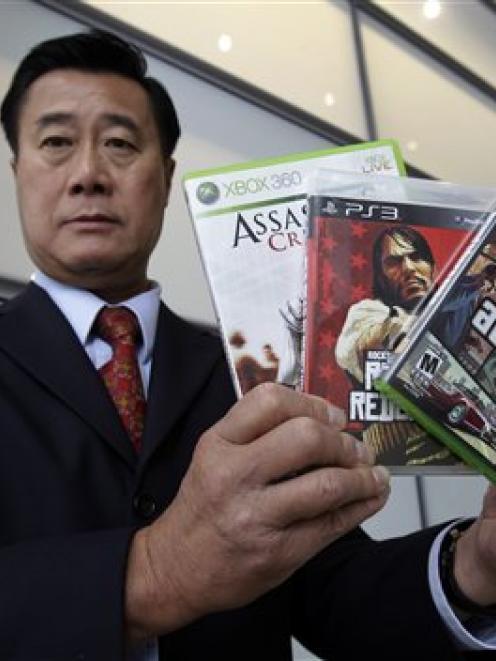 California State Senator Leland Yee, of San Francisco, holds up three video games after a news conference in San Francisco. (AP Photo/Paul Sakuma)
States cannot ban the sale or rental of ultraviolent video games to children, the Supreme Court has ruled, rejecting such limits as a violation of young people's First Amendment rights and leaving it up to parents and the multibillion-dollar gaming industry to decide what kids can buy.

The high court, on a 7-2 vote, threw out California's 2005 law covering games sold or rented to those under 18, calling it an unconstitutional violation of free-speech rights. Writing for the majority, Justice Antonin Scalia, said, "Even where the protection of children is the object, the constitutional limits on governmental action apply."

Scalia, who pointed out the violence in a number of children's fairy tales, said that while states have legitimate power to protect children from harm, "that does not include a free-floating power to restrict the ideas to which children may be exposed."

Justices Stephen Breyer and Clarence Thomas dissented from the decision, with Breyer saying it makes no sense to legally block children's access to pornography yet allow them to buy or rent brutally violent video games.

"What sense does it make to forbid selling to a 13-year-old boy a magazine with an image of a nude woman, while protecting the sale to that 13-year-old of an interactive video game in which he actively, but virtually, binds and gags the woman, then tortures and kills her?" Breyer said.

Video games, said Scalia's majority opinion, fall into the same category as books, plays and movies as entertainment that "communicates ideas - and even social messages" deserving of First Amendment free-speech protection. And non-obscene speech "cannot be suppressed solely to protect the young from ideas or images that a legislative body thinks unsuitable for them," he said.

This decision follows the court's recent movement on First Amendment cases, with the justices throwing out attempts to ban animal cruelty videos, protests at military funerals and political speech by businesses.

The court will test those limits again next session when it takes up a new case involving government's effort to protect children from what they might see and hear. The justices agreed to review appeals court rulings that threw out Federal Communications Commission rules against the isolated use of expletives as well as fines against broadcasters who showed a woman's nude buttocks on a 2003 episode of ABC's "NYPD Blue."

The decision to hear the FCC case was one of the last the full court made this session. Before leaving on their annual summer break on Monday, the justices also:

- Voted 5-4 to strike down a provision of a campaign financing system in Arizona that gives extra cash to publicly funded candidates who face privately funded rivals and independent groups.

- Agreed to hear arguments in the autumn or winter on whether police need a warrant before using a global positioning system device to track a suspect's movements.

- Refused to hear an appeal from former detainees at the Abu Ghraib prison in Iraq who wanted to sue defence contractors over claims of abuse.

More than 46 million American households have at least one video-game system, with the industry bringing in at least $US18 billion in 2010. The industry has set up its own rating system to warn parents which video games are appropriate for which ages, with the rating "M'' placed on games that are considered to be especially violent and only for mature adults.

That system is voluntary, however. California's 2005 law would have prohibited anyone under 18 from buying or renting games that give players the option of "killing, maiming, dismembering, or sexually assaulting an image of a human being." Parents would have been able to buy the games for their children, but retailers who sold directly to minors would have faced fines of up to $1,000 for each game sold.

That means that children would have needed an adult to get games like "Postal 2," the first-person shooter by developer Running With Scissors that includes the ability to light unarmed bystanders on fire. It would also apply to the popular "Grand Theft Auto" games, from Rockstar Games, that allow gamers to portray carjacking, gun-toting gangsters.

The California law never took effect. Lower courts have said that the law violated minors' constitutional rights, and that California lacked enough evidence to prove that violent games cause physical and psychological harm to minors. Courts in six other states, including Michigan and Illinois, reached similar conclusions, striking down similar bans.

Video game makers and sellers celebrated their victory, saying Monday's decision puts them on the same legal footing as other forms of entertainment. "There now can be no argument whether video games are entitled to the same protection as books, movies, music and other expressive entertainment," said Bo Andersen, president and CEO of the Entertainment Merchants Association.

But the battle may not be over. Leland Yee, a child psychologist and California state senator who wrote the video game ban, told The Associated Press Monday that he was reading the dissents in hopes of finding a way to reintroduce the law in a way that would be constitutional.

"It's disappointing the court didn't understand just how violent these games are," Yee told the AP.

Thomas argued in his separate dissent that the nation's founders never intended for free speech rights to "include a right to speak to minors (or a right of minors to access speech) without going through the minors' parents or guardians."

And at least two justices, Chief Justice John Roberts and Justice Samuel Alito, indicated they would be willing to reconsider their votes under certain circumstances. "I would not squelch legislative efforts to deal with what is perceived by some to be a significant and developing social problem," Alito said, suggesting that a narrower state law might be upheld.

States can legally ban children from getting pornography. But Scalia said in his ruling that, unlike depictions of sexual conduct, there is no tradition in the United States of restricting children's access to depictions of violence. He noted the violence in the original depictions of many popular children's fairy tales such as Hansel and Gretel, Cinderella and Snow White.

Hansel and Gretel kill their captor by baking her in an oven, Cinderella's evil stepsisters have their eyes pecked out by doves and the evil queen in Snow White is forced to wear red hot slippers and dance until she is dead, Scalia said.

"Certainly the books we give children to read - or read to them when they are younger - contain no shortage of gore," he said.

And there is no proof that violent video games cause harm to children, or any more harm than another other form of entertainment, he said.

One doctor "admits that the same effects have been found when children watch cartoons starring Bugs Bunny or the Road Runner or when they play video games like Sonic the Hedgehog that are rated 'E' or even when they 'view a picture of a gun," Scalia said.

"I wonder what other First Amendment right does a child have against their parents' wishes?" he said. "Does a child now have a constitutional right to bear arms if their parent doesn't want them to buy a gun? How far does this extend? It's certainly concerning to us that something as simple as requiring a parental oversight to purchase an adult product has been undermined by the court."