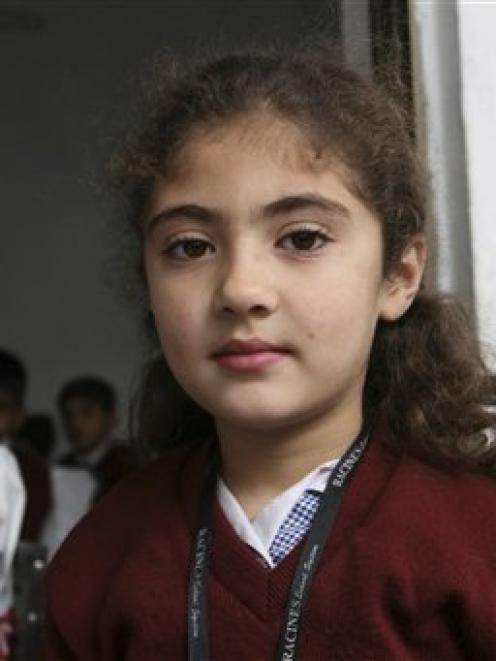 In this AP image taken on December 3, 2009, 8-year-old Pakistani student Saira Khan, is seen outside her classroom in Peshawar, Pakistan.
Grisly ghosts haunt 8-year-old Saira Khan's dreams. Her tiny hands cover her mouth as she tells of the images that come to her at night, images of burnt and mutilated bodies.

She heard an explosion last month just a few blocks away from her cousin's home.

"I got so scared," she says, her eyes getting wider. "We didn't know what to do, so we just lay on the floor."

Peshawar, where Saira lives, is on the front line of Pakistan's war against militants. In October, the Pakistani army launched its most concentrated offensive yet in Peshawar, against the tribal strongholds of some of the country's most ruthless militants. The militants in turn are fighting back with a vicious bombing campaign. They are striking with frightening regularity anywhere and everywhere in the city. That leaves the people of Peshawar caught in between, afraid, fed up and mistrustful of all sides: the militants, the Pakistani army and the United States, which is seen as supporting the push against insurgents.

Peshawar hospitals are overwhelmed with wounded from nearly daily explosions. Dozens of police barricades meant to catch suicide bombers slow the chaotic traffic on bigger roads to a crawl. Schools are shut periodically because of security fears.

Ten-year-old Kainat, who goes to Saira's school, calls her hometown scary and telephones her friends all the time now.

"I am just worried about everyone," she says. "I talk to them all the time, and I ask, 'how is your mother and your father and everyone is safe?' I just want to know that everyone is all right."

The school hides within a 3-metre-high metal gate with two guards watching it. One guard checks the small backpacks of the children every morning with a metal detector.

The Taliban has routinely attacked schools, particularly ones attended by girls.

The school principal and owner, retired Maj. Sultan Hussain, says he has trained his guards to trust no one.

"I have told them, don't believe anyone, doubt everyone, search everyone," he says.

The strict security measures are a stark change from just a few months ago, when people were rarely stopped from entering the school compound.
"We even discourage parents from coming to the school," says Hussain. "The fewer adults seeking access the better. The situation here is very bad."

Peshawar, capital of Northwest Frontier Province, has always been on the front lines because of its location, sprawled out at the foot of the famed Khyber Pass next to Afghanistan. It has been raided by the likes of Genghis Khan, Tamerlaine and Alexander the Great, and writer Rudyard Kipling once described it as a place of tribesmen, smugglers and horsemen.

The Pakistani army launched its offensive on October 17. Militant leader Hakimullah Mehsud vowed to exact his revenge with suicide attacks. In one month in Peshawar, 221 people were killed and nearly 500 wounded in bombings. A single truck bomb in a market that sells mostly women's clothes and children's toys killed more than 100.

The latest attack was on Monday when a bomb went off outside the courthouse in Peshawar, killing 10 people. Yet in the marketplaces, people wonder at who is behind the bombing campaign. More often than not, their answer is not the militants. Occasionally it is Pakistan's spy agency, but most often it is a "foreign hand", which here in northwestern Pakistan usually refers to the United States.

At the entrance to Peshawar's Saddar Street, a congested shopping area where most government and army buildings are located, steel yellow striped barricades force vehicles to stop. Cyclists are patted down, and four policemen are armed with AK-47 assault rifles. They have no dogs trained to sniff out explosives, and the authorities have run out of bulletproof vests.

"But we are not afraid," says the head constable, Sifatullah Khan. "We are Pukhtuns. We are standing here without anything showing the terrorists that we are not afraid of them. And if a suicide bomber explodes himself here, then a bulletproof vest won't save you."

The suicide bombers are becoming more sophisticated, Khan says, hiding their explosives in the door panels of their vehicles. "Of course we are worried about the situation here. But if I could save the whole of Saddar from a suicide bomber, then it is a sacrifice I would make of my life," Khan says.

In the Lady Reading Hospital, Peshawar's oldest and largest hospital, the war is ever-present. The last thing police officer Samiullah Ahmed remembers is the sound of a deafening explosion that killed 19 people. He lies in a hospital bed grimacing as his elder brother spreads ointment on his burned face and hands.

"Everyone is afraid," he says. In the ward reserved for blast victims, there is a consensus among the wounded: The army should stop its assault on the militants to bring peace to their city.

In a neighbouring bed, 16-year-old Noman is recovering from wounds received in the same explosion. The only son in a household of five girls, Noman and his father take turns rickshaw driving to earn money. He has narrowly missed death twice in bomb explosions during the last month.

"He's my only son," says Noman's father, Akram. "All we want is peace, and I think the army should stop so we can have peace."

Dr Arif Attaullah says he does not cry easily. But when the truck bomb killed 112 people in Peshawar's Mena Bazaar he could not stop the tears.

"A father came in and he was holding a small boy. The boy's body was burned black and his father was crying: 'I sent you to school to learn, not to die,"' Attaullah says. "That made me cry. I am a tough person - a surgeon - but day after day we are seeing these things that are too horrible."

Dr Muslim Khan, who is deputy head of the emergency department, says the relentless attacks and steady stream of wounded and dead are taking a psychological toll on his doctors.

"Little things make them angry, they are often depressed," he says. "My wife tells her friends that for at least one hour when I get home no one can talk to me. I guess it is true."

The cavernous room that is the initial port of call for the dead and wounded is stacked with dozens of gurneys and stretchers, intravenous poles listing to one side, all at the ready for the next bombing. The online blood bank at the 1,450-bed hospital has stocks reserved exclusively for blast victims. Security is tight. Guards stand at every gate, patting down visitors, refusing to allow vehicles to enter. Patients have been restricted to one visitor.

"It's hard to tell the good guys from the bad guys," says Dr Bilal Ahmed. "It's scary."

They all agree the army should end its operation in the tribal regions that border Peshawar, negotiate and find peace. Khan says he believes the United States has the technology and the ability to end the fighting but chooses not to.

"I think that America wants this drama because it is in their interest, because they want a reason to take our nuclear weapons," he says.

Provincial Information Minister Iftikar Hussain is on the Taliban's hit list. In February 2008, voters threw out a right-wing religious government made up mostly of mullahs or clerics and put in power the secular-leaning Awami National Party (ANP) or People's National Party, to which Hussain belongs.

The Taliban have killed more than 200 ANP workers. In a statement, it also vowed to kill Hussain. Hussain travels with an armed guard but says he will not be driven underground by the Taliban.

"We believe that our fate is written, that our time of death is already written," he says.

Hussain's government last week announced the establishment of a 2,000-strong Community Watch force to work with the police to intercept militants trying to sneak into cities with explosive-packed cars. Already, lashkars, or local militias drawn from the villages, take similar precautions.

Fahimur Rahman Khan heads one such lashkar in Basidkhiel, barely 10 kilometres from Peshawar but next door to the violent Khyber tribal belt. The Taliban have tried several times to kill Khan. Just two weeks ago they sent their gunmen hidden beneath the all-enveloping burqa to kill Khan. They failed. But the attempts have left 35 dead and more than 140 injured.

Mobilising the people is key to defeating the Taliban, says Khan.

"The Taliban cannot do anything without the support of the people," he says. "The locals know who they are and can run them out of town."
AP
Comment now