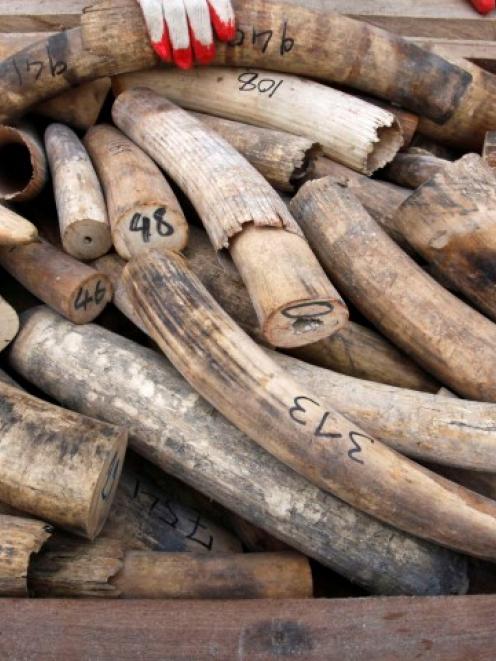 Elephant poaching in Kenya declined sharply after 1989 when the government banned trade in ivory. But it has revived in recent years, driven by fast-rising demand for ornamental ivory in Asia in step with growing Chinese influence and investment in Africa.

Kenya Police and Kenya Wildlife Service (KWS) said there had been a shootout between security forces and poachers late on Tuesday in the Mlango area of the eastern county of Isiolo.

"A team of rangers from the anti-poaching unit (of KWS) and police shot the two poachers and eight tusks were recovered," Isiolo police commander Daniel Kamanga told Reuters. They also recovered rifles and ammunition.

KWS said it had also arrested two suspected poachers in Isiolo on Sunday and recovered ivory and a rifle and ammunition.

On Saturday, a gang of about 10 people killed a family of 12 elephants, including a calf, and hacked off their tusks in Tsavo East National Park, in the biggest single mass shooting of the animals on record in Kenya.

Prime Minister Raila Odinga said on Wednesday at least 360 elephants were killed last year, up from at least 289 in 2011.

"The danger seems to be worsening with every passing day. We must respond to this growing threat in a big way and we must respond fast," he said in a statement.

"Security agencies must treat the emerging poaching threat as part of the insecurity gripping the country and not a wildlife issue to be addressed solely by the Kenya Wildlife Service."

In May, 359 tusks seized in Sri Lanka were found to have come from Kenya's Mombasa port.

Police impounded 214 tusks worth $1.32 million hidden in a coffin and fertiliser bags in neighbouring Tanzania in October. The force said smugglers had planned to transport the ivory to Kenya for shipment to Asia.

"While the events in Kenya are clearly part of the growing global surge in poaching fuelled by high demand for ivory in Asian countries, we have a duty to secure our precious wildlife for posterity and continued economic wellbeing of our nation," Odinga said.