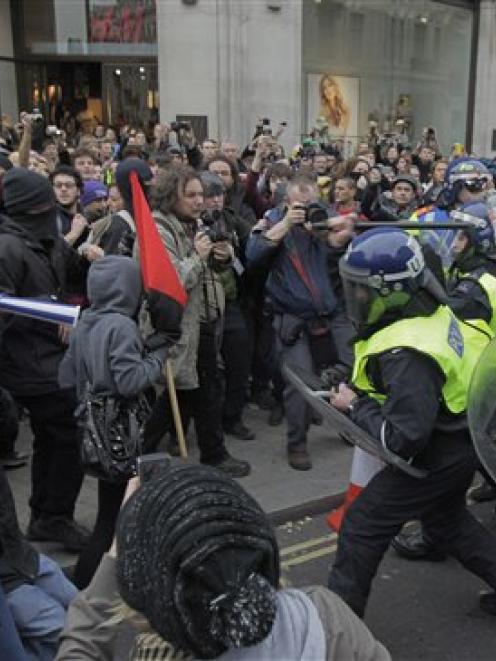 British riot police officers clash with demonstrators against the coalition government's spending cuts, in central London, on Saturday. (AP Photo/Lefteris Pitarakis)
Scotland Yard is bracing to fend off possible security threats to the royal wedding from groups that range from terrorists to anti-monarchists.

The announcement came only days after a peaceful demonstration Saturday against government spending cuts was disrupted by violence. Police made more than 200 arrests as the march drew 250,000 people to London, the largest protest in Britain since the Iraq war.

Police commander Bob Broadhurst said the April 29 wedding of Prince William and Kate Middleton carries even more of a security threat than the anti-austerity protests, and that means police officers will be able to tap into special stop-and-search powers that fall under Britain's counterterrorism laws.

"They won't get away with it," Broadhurst told BBC radio Monday. "The royal wedding has a different tenor to it. It's a security operation largely."

British security officials have said there is no specific terror threat to the wedding, but they are monitoring chatter over the Internet and other channels.

Several anarchists and protesters used Twitter and other social media sites over the weekend to promise more mayhem on the day of the wedding. Some anti-monarchists also said they plan to have a presence near the Abbey next month.

"You're looking at a different type of threat," Broadhurst said, calling the threat to the royal wedding, "a threat to democracy."

Britain's government has pledged to scrap a law that bans any unauthorized protest within about 0.8km of the Houses of Parliament - which includes the royal wedding venue at Westminster Abbey - but it is likely to be several months before the rule is actually dropped.

Lawmakers are now debating a bill that proposes loosening oversight of protests and suggests curbing police powers to conduct random searches. Until the bill is passed, however, ministers will have the power to ban protests along much of the wedding route - or to limit the size, duration and noise levels of any planned demonstration.

Prime Minister David Cameron's spokesman Steve Field said police will provide adequate security for the wedding. Police were criticised for being too slow to realise what some of the protesters over the weekend were planning.

"We need to learn the lessons as we go and make sure we have the right arrangements in place, and that's what we will do in the case of the royal wedding," Field said.

A security barrier will be erected around Westminster Abbey but police say it's too soon to say whether wedding guests or passers-by will be searched. Police make security recommendations to the royal family, which they can choose to enact them or not.

In December, street gangs and hardcore activists infiltrated a student protest against education cuts and attacked a car carrying Prince Charles and his wife, Camilla.

Several hundred people vandalized government buildings, battled riot police and yelled at the royal couple as they drove to a theater - smashing a window of their Rolls-Royce and splattering the car with paint.

Several are facing charges for the incident. The car itself is being repaired in time to ferry royal fiancee Middleton to the Abbey for the wedding.