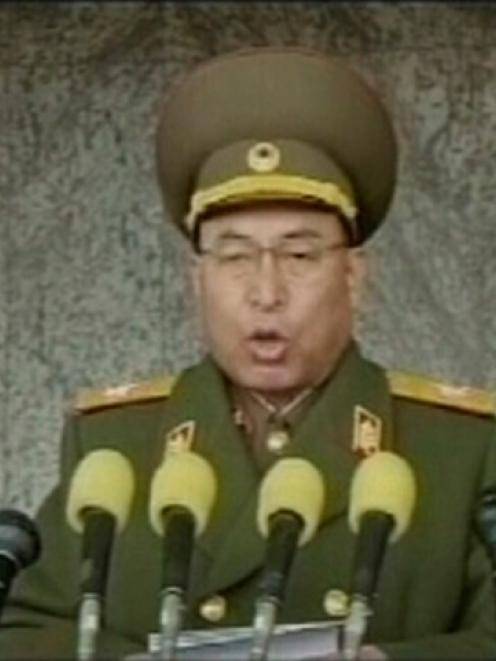 North Korean army general Ri Yong-ho, seen here in a still image taken from video, has been relieved of his political posts. REUTERS/KRT via REUTERS TV/Files
North Korea's ruling party has removed a top military official close to the centre of power, suggesting new leader Kim Jong-un and his closest advisers may be purging the ruling elite to strengthen their grip on the secretive state.

It is the latest surprise from the young Kim, who last week stunned observers by jazzing up the ruling family dynasty's normally dour image when he appeared on state television in the company of a mystery young woman, cheerfully applauding scantily dressed female pop singers.

Vice Marshal Ri Yong-ho, who was seen as close to Kim's dictator father Kim Jong-il, was relieved of his posts in the Workers' Party of Korea at a politburo meeting on Sunday, including the powerful role of vice chairman of the Central Military Commission, the state KCNA news agency said on Monday.

Illness was given as the reason for the move on Ri, who is 70 years old, according to a South Korean government database. Health is often used as the reason when senior officials are sacked.

"This is a sudden move, one that you could call a purge," said Cho Min of South Korea's Institute for National Unification, who studies the North's leadership and its tactics.

In Washington, spokesmen for the State Department and Pentagon said they were aware of the reports but declined to speculate as to what motivated them.

"We're not in a position to comment on the accuracy of these news reports, but changes in personnel absent a fundamental change in direction mean little," said State Department spokesman Patrick Ventrell.

Ventrell repeated a long-standing U.S. call for Pyongyang to return to negotiations on dismantling North Korea's nuclear weapons in exchange for economic aid and diplomatic recognition. These talks have been stalled since 2008.

North Korea should take steps including "verifying all denuclearization and addressing the needs of its people by educating and feeding them rather than pouring scarce resources into nuclear missile and other military programmes," he said.

Ri showed no sign of ill-health when he was seen in public a week ago with Kim Jong-un and senior military officials visiting a memorial in the capital Pyongyang honoring the founder of the state Kim Il-sung, and the current ruler's grandfather, on the anniversary of his death in 1994.

It was not clear from the brief KCNA report whether Ri, a career officer who rapidly rose through to top ranks of the army in recent years culminating in the appointment as chief of general staff, was also relieved of his military posts.

"The reason would be all speculation, but you might say Ri may have tried to firm up his own position which may have been to the dislike of Jang Song-thaek and Choe Ryong-hae," said Cho.

Jang is the young leader's uncle by marriage to Kim Jong-il's sister. He is believed to be the real power behind the throne in the impoverished state as chief adviser to his nephew, who is in his late 20s.

Choe is a senior party official who has taken on an increasingly powerful role within the political apparatus of the military in a state ruled by the "military-first policy," or Songun, preached by Kim Jong-il.

Kim Jong-un took power after his father died in December.

Bruce Klingner, a Korea expert at the Heritage Foundation in Washington and a former U.S. intelligence analyst, said Ri's removal was indicative of a power struggle.

"But what's less certain is who's struggling against whom," he said.

Klingner said the murky nature of North Korean politics made it hard to discern which of the "four Ps" - power, people, positions or policy - was being contested in Pyongyang.

"I think it could be a struggle over power, people or positions, but not necessarily policy," said Klingner, adding that Kim Jong-un had shown changes in style, but not substantially departed from his father's policies.

Experts say there is heavy pressure on the new leadership not only to establish its political legitimacy, but also to ease discontent among an impoverished public.

The rule of Kim's father saw the economy dragged deeper into poverty as a result of mismanagement and increasingly tough international sanctions over his efforts to develop a more lethal armory, including nuclear weapons.

By the time Kim Jong-il died, North Korea could not feed itself even during good harvests and had become heavily dependent on help from neighboring China to feed a population of 24 million.

Ri was a member of an eight-man procession which walked with the hearse carrying Kim Jong-il in a state funeral in December, and was subsequently seen at the new leader's side.

"'Due to illness' has to be an excuse, I think," said Kim Yong-hyun who teaches North Korea studies at Seoul's Dongguk University. "It is more likely the result of a power struggle that is shaping up in the Kim Jong-un regime."

Cho of the Korea Institute for National Unification said he believed the plan to oust Ri had been in the making for several months.

"This is likely the conclusion, rather than the beginning, of a series of moves to reshuffle the military. I believe 200 mid-level officers in the military have already been removed as part of Jang and Choe's reorganization of the country."