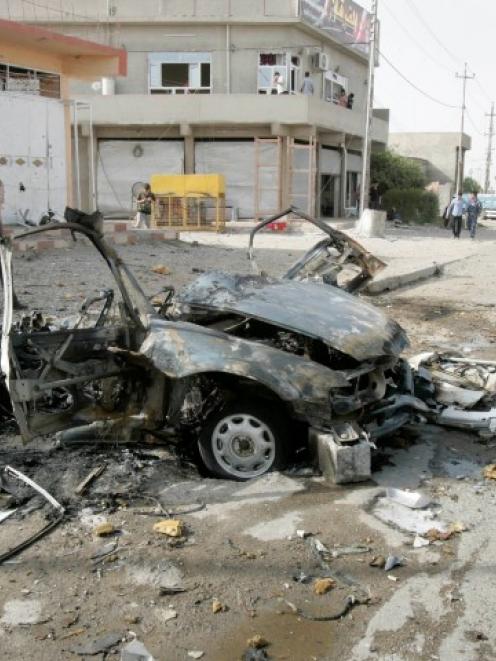 Security personnel inspect the site of a car bomb attack in Kirkuk, 250km north of Baghdad. REUTERS/Ako Rasheed
A series of bombings and shootings has killed more than 70 people across Iraq in a bloody day of attacks underscoring the country's struggle with a stubborn insurgency more than half a year after the US military withdrew.

In the worst of the blasts that erupted in the morning and ended in the evening, at least 27 people were killed when a car bomb exploded outside a cafe in Baghdad's Zafraniya district as Iraqis took to the streets to end daily fasting for the Muslim holy month of Ramadan.

Shortly before the Zafraniya blast, another bomb tore into a busy intersection outside a popular ice cream store in the mainly Shi'ite district of Sadr City, killing 16 and wounding 40 more, police and hospital officials said.

"I was sitting in the cafe when I felt a huge spark like electricity in my eyes, and a huge explosion. After that I woke up in hospital with injuries to my arms and shrapnel in my back," said Amjad Saad, 23, a college student.

No group claimed responsibility for Thursday's bombings and shootings, but a local al Qaeda affiliate and other Sunni Islamist groups have carried out at least one major assault a month since the last American troops left in December.

Al Qaeda's local wing, the Islamic State of Iraq, says it has begun a new offensive against mainly Shi'ite targets, and security experts say it has benefited from cash and morale thanks to the inflow of fighters into neighbouring Syria.

Security had been tightened in Baghdad ahead of the end of Ramadan next week, a period when analysts had said they believed insurgents may attempt a major coordinated attack.

Another six police and army soldiers were killed by gunmen who opened fire on their checkpoint from two speeding cars in the north of the capital, police said.

Kirkuk, which sits on massive oil reserves, is at the heart of a dispute between Baghdad's central government and the country's autonomous Kurdistan region, both of which claim the city as part of their area of territorial control.

Overnight attacks on police checkpoints in the cities of Baquba and Falluja killed six policemen and wounded 13, police and hospital sources said. More attacks and smaller bombings hit several other towns across Iraq.

Sunni Muslim insurgents have launched a string of attacks on Shi'ite targets to try to reignite the sectarian violence that killed tens of thousands of people in 2006-2007 and to undermine the country's Shi'ite-led government.

The Islamic State of Iraq insurgents have also said their suicide bombers attacked a counter-terrorism unit in Baghdad earlier in August to try to free prisoners held there. Police managed to fend off the attack and kill the attackers.

Iraq's security forces are generally seen as capable of containing the insurgents, but a crisis among Shi'ite, Sunni and Kurdish factions is fueling sectarian tensions and paralysing their power-sharing government.