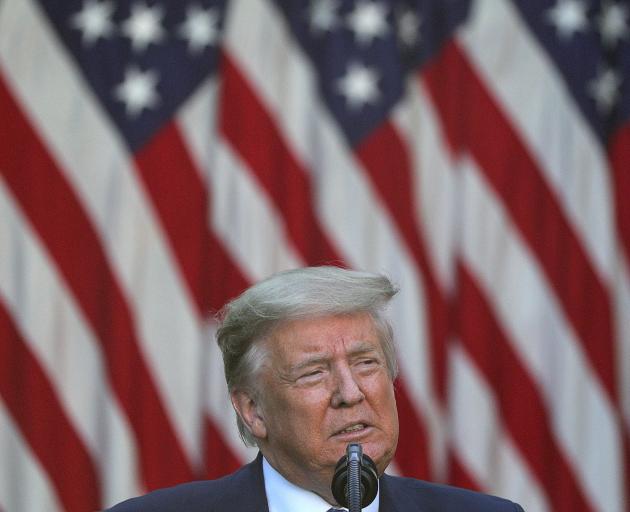 President Donald Trump gave a televised address at The White House after days of violence throughout the United States. Photo: Reuters
US President Donald Trump has vowed to end violent protests in major cities across the nation "now," saying that he would deploy the military if mayors and state governors refused to call out the National Guard.

"My first and highest duty as President is to defend our great country and the American people." pic.twitter.com/V70hAt4WLU

Nearly a week of demonstrations, largely peaceful during the day but turning violent after dark, have erupted over the death of George Floyd, a 46-year-old African American who died in Minneapolis police custody after being pinned beneath a white officer's knee for nearly nine minutes on May 25, Memorial Day.

Derek Chauvin, a since-fired 44-year-old police officer, has been charged with third-degree murder and second-degree manslaughter. He was released on $US500,000 ($NZ794,000) bail and is due to appear in court on June 8, according to jail records.

As Trump spoke in the Rose Garden of the White House on Monday, live television images showed police firing tear gas to dispel demonstrators in Lafayette Park, across the street.

"Mayors and governors must establish an overwhelming law enforcement presence until the violence has been quelled," Trump said.

"If a city or state refuses to take the actions that are necessary to defend the life and property of their residents, then I will deploy the United States military and quickly solve the problem for them."

Beyond that, active US military duty troops - including military police and engineering units - were on standby in the National Capital Region but outside the city itself and were ready to deploy if needed. The hope, the first official said, was that the additional Guard units would make the use of active duty troops unnecessary. 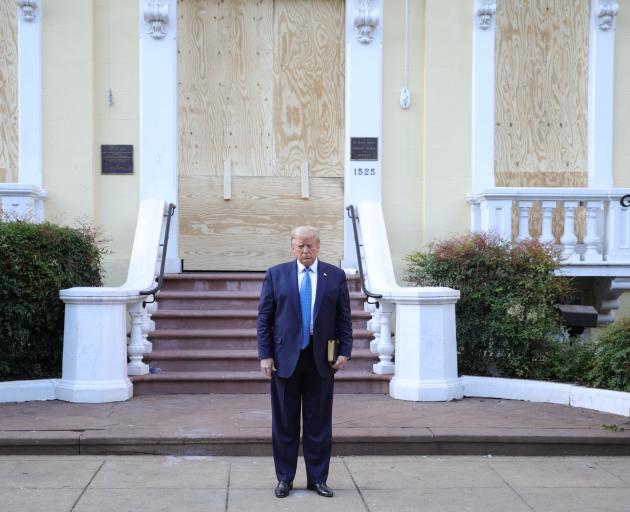 Donald Trump holds a Bible as he stands in front of St. John's Episcopal Church across from the White House. Photo: Reuters

As the police action against protesters gave him safe passage, Trump then walked from the White House to nearby St John's Episcopal Church along with other officials including US Attorney General William Barr.

Trump posed for photos outside the damaged church, where many US presidents have worshipped, holding up a Bible.

Trump, a Republican, has condemned the killing of Floyd and promised justice but has described protesters as "thugs."

Critics accuse him of stoking conflict and racial tension when he should be uniting the nation and addressing underlying issues, and his appearance at St John's Church sparked condemnation.

"I am outraged," Bishop Mariann Edgar Budde of the Episcopal Diocese of Washington, which includes the church, said on CNN. Trump's message was antithetical to church teachings, she said.

New York Governor Andrew Cuomo criticized the use of force against demonstrators to make way for Trump to hold the picture-taking opportunity. "It was really, truly shameful,” he said.

TRUMP: 'YOU NEED TO DOMINATE'

A second post-mortem ordered by Floyd's family and released on Monday found that his death was a homicide by "mechanical asphyxiation," meaning some physical force interfered with his oxygen supply. The report says three officers contributed to Floyd's death.

The Hennepin County Medical Examiner also on Monday released details of its post-mortem findings that also said Floyd's death was a homicide caused by asphyxiation. The county report added that Floyd suffered cardiopulmonary arrest while being restrained by police and that he had arteriosclerotic and hypertensive heart disease, fentanyl intoxication and recent methamphetamine use.

Here's part of the audio from President Trump's call with governors where he said the "whole world was laughing at Minneapolis over the police station getting burned." pic.twitter.com/TkrcM9cgne

The new findings emerged after Trump spoke to the governors earlier in the day.

"You have to dominate," he told them in a private call obtained by Reuters. "If you don’t dominate, you’re wasting your time - they’re going to run over you, you’re going to look like a bunch of jerks."

Trump said the federal government was going to clamp down "very strong" on the violence. National Guard troops were deployed near the White House early Monday evening.

Dozens of cities across the United States remain under curfews at a level not seen since riots following the 1968 assassination of civil rights activist Martin Luther King Jr. The National Guard deployed in 23 states and Washington, D.C.

Curfews were extended in Washington, D.C., where authorities fought to put out fires near the White House overnight; in Minnesota, which has experienced some of the worst violence, and in Los Angeles.

One person was killed in Louisville, Kentucky, overnight where police and National Guard troops returned fire while trying to disperse a crowd. Police in Chicago, the country's third-largest city, fielded more than 10,000 calls for looting, Mayor Lori Lightfoot told a briefing. 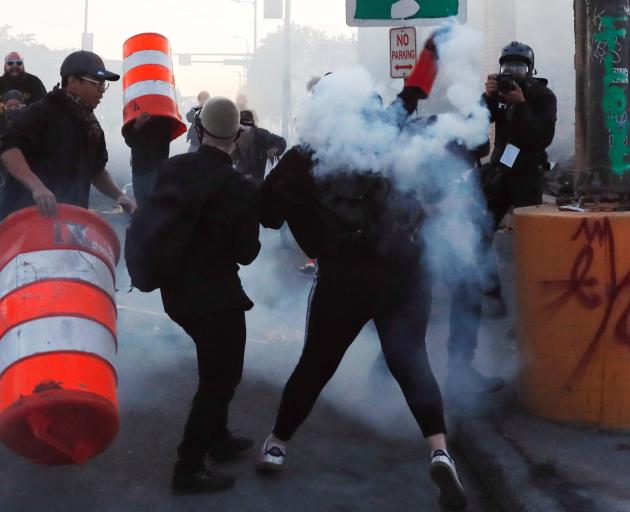 On Monday, dozens of people quietly paid their respects to Floyd at the scene outside the Cup Foods where he lost his life. Visitors left flowers and signs honouring Floyd on the pavement. A little girl wrote, “I’ll fight with you,” in aqua blue chalk in the road.

"This is therapeutic. My heart was real heavy this morning so I came down extra early and when I got here, the heaviness lifted,” said Diana Jones, (40), the mother of four children. “This right here let’s me know that things are going to be OK.”

Terrence Floyd, the victim's brother, told the gathering he wanted people to get educated, vote and not destroy their own communities. "Let's do this another way," he said.

Floyd's death was the latest in a string of similar incidents to prompt an outcry over racism in law enforcement. It reignited outrage across a politically and racially divided country that has been hit hard by the coronavirus pandemic, with African Americans accounting for a disproportionately high number of coronavirus cases.

The US Justice Department has directed the Bureau of Prisons to send riot-control teams to Miami and Washington, D.C., to help manage the protests, a senior department official told reporters.

Department investigators are interviewing people arrested during protests who might face federal charges for such offences as crossing state lines to incite violence, the official said.

Many cities affected by the unrest are restarting some normal economic activity after more than two months of stay-at-home orders to stem a pandemic that has killed more than 104,000 people and plunged more than 40 million people into joblessness.

Critics accuse the Republican president, who is seeking re-election in November, of stoking conflict and racial tension rather than seeking to bring the country together and address the underlying issues.

Democratic presidential candidate Joe Biden, critical of Trump's handling of the crisis, met black community leaders in a church and said he would create a police oversight board within his first 100 days in the White House.