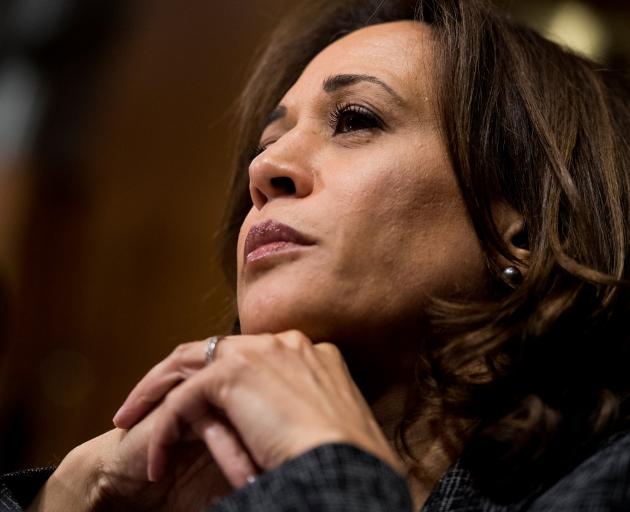 Kamala Harris who was the only minority woman in the race, would have been the first woman and second black US president if elected next November. Photo: Reuters

US Senator Kamala Harris ended her 2020 presidential bid on Tuesday (local time), abandoning a campaign that began with promise for a rising Democratic Party star but faltered as she struggled to raise money and make a compelling case for her candidacy.

Her departure further narrows the field of White House contenders exactly two months before voting begins in Iowa, the first nominating contest, and gives her rivals a chance to court Harris' supporters in their final bids to shore up the nomination.

Harris, 55, the only minority woman in the race, would have been the first woman and second black US president if elected next November.

The senator from California positioned herself as a unifying candidate who could energise the party's base of young, diverse progressives while also appealing to more moderate voters.

Yet after climbing into double digits in opinion polls following a strong debate performance in June, Harris slid out of the top tier in recent months and lagged behind leading candidates' fundraising hauls.

"I've taken stock and looked at this from every angle, and over the last few days have come to one of the hardest decisions of my life," Harris said in an email to supporters on Tuesday. "My campaign for president simply doesn't have the financial resources we need to continue."

Harris finished September with $US9 million in cash, according to finance disclosures her campaign filed. By comparison, Massachusetts Senator Elizabeth Warren had nearly $US26 million at that point.

Harris' campaign recently began showing signs of trouble, including stagnant fundraising and public complaints by former staffers that her staff was being treated poorly.

"She just hasn't quite satisfactorily answered the ‘what makes you better than the other candidates' question," said a longtime aide, who spoke on condition of anonymity. "That's the underlying biggest thing. She hasn't quite sufficiently explained her rationale for herself."

Joel Payne, an African-American strategist who worked for Democrat Hillary Clinton in the 2016 presidential campaign, said Harris failed to find her own identity as she tried to own the space on the political spectrum between progressives such as US Senator Bernie Sanders and Warren and moderates such as former Vice President Joe Biden.

“I think she probably ended up alienating both” camps, he said.

Harris was polling badly in her home state of California - which will vote on "Super Tuesday" in March, an early important election day when 16 states will hold primary contests.

Payne said Harris exited the race at the right time before potentially embarrassing losses, which will help her preserve her political future.

He could envision several remaining candidates, including Warren; South Bend, Indiana, Mayor Pete Buttigieg; or even Biden choosing her as their vice presidential nominee.

Harris is the first of the top-tier candidates to leave the crowded nominating contest field, which offered the most diverse slate of candidates in American electoral history. The Democratic nominee will challenge Republican President Donald Trump in November 2020.

Harris qualified for the December debate, which will be held in her home state. Her departure could now leave a stage of only white competitors. Two minority candidates, US Senator Cory Booker and former federal housing chief Julian Castro, remain in the race but neither has qualified for the debate.

Harris entered the race as an immediate front-runner but struggled to maintain support, which critics said was fueled by her inability to articulate policy positions and the backlash of an attempt to attack rival former Biden.

Antjuan Seawright, an African-American Democratic strategist in South Carolina, praised Harris for “highlighting the tremendous role that African-American women play when they are on the stage and not in the seats. Her legacy will live on.”

But her "campaign made some missteps in terms of strategy and messaging," he said, despite Harris visiting South Carolina more than any other candidate.