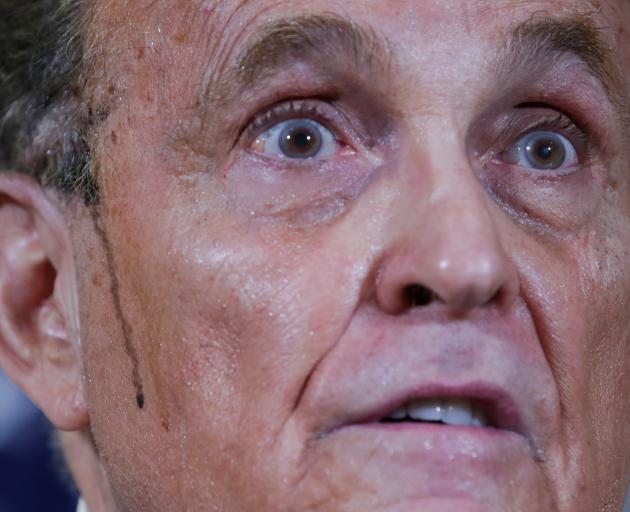 "This is real! It is not made up!" Giuliani shouted at reporters in the room. "There is nobody here that engages in fantasy. I have tried a hundred cases. I prosecuted some of the most dangerous criminals in the world. I know crimes. I can smell them."

Despite Giuliani's claims, there's no evidence that Biden's decisive victory was facilitated by any type of widespread fraud.

It appears that Rudy Giuliani is sweating through his hair dye. pic.twitter.com/OY3dGL1BtX

Election officials from both parties in all 50 states have asserted that the Nov. 3 contest was remarkably secure, and international observers say no major irregularities or fraud occurred.

But that hasn't stopped Trump's team of lawyers from filing a flurry of lawsuits alleging that an insidious voter fraud plot carried Biden to victory and that millions of ballots should be thrown out as a result.

Giuliani went so far as to accuse Biden himself of crimes.

"He doesn't get asked questions about all the evidence of the crimes that he committed," Giuliani said Thursday, without explaining what crimes Biden supposedly committed.

"What's going on in this country is horrible," said Giuliani, who dabbed at his face with a napkin and at one point appeared to have hair dye running down his face.
One component of the Trump campaign's dubious accusations involve the idea that Republican election watchers weren't allowed to stand close enough to poll workers in Pennsylvania and other states.

Giuliani tried to drive home that point by referencing a scene from the 1992 movie "My Cousin Vinny," which he called "one of my favorite law movies, because he comes from Brooklyn."

"These people were further away than 'My Cousin Vinny' was," he said of the poll watchers. "They couldn't see a thing!"

Most of the Trump campaign's lawsuits have been thrown out by judges who note that the wild assertions of voter fraud aren't backed up by evidence.
Still, Giuliani vowed to keep filing more lawsuits.

"We're about to file a major lawsuit in Georgia. That will be filed probably tomorrow," he said.

The ex-mayor also lashed out at the FBI after a reporter asked why the agency isn't getting involved if election crimes are as rampant as the Trump campaign claims.

"I don't know where the FBI has been for the last three years," he said. "What do we have to do to get the FBI to wake up? Maybe we need a new agency to protect us."

Sidney Powell, another member of Trump's legal team, piled on by falsely claiming the president won the election.

"President Trump won by a landslide," she said. "We are going to prove it and we are going to reclaim the United States of America."

Trump, who has barely been seen in public since losing the election, cheered on his lawyers from the White House.

"Lawyers now on," he tweeted. "An open and shut case of voter fraud. Massive numbers!"

As it has been forced to do dozens of times in recent weeks, Twitter quickly labelled the Trump tweet as "disputed."

Trump's refusal to concede the election is beginning to have dire consequences.

Biden said this week that he's concerned his administration will be behind the ball on shipping doses of a potential Covid-19 vaccine because Trump has blocked the incoming president's transition team from accessing federal distribution plans.

Trump is also blocking Biden from receiving the top-secret intelligence briefings that presidents-elect are supposed to get in order to be up to speed on threats facing the nation before taking office.

Meanwhile, with legal challenges to his loss in the election flailing, Trump's campaign is trying to persuade Republican state legislators to intervene in battleground states won by Biden.

The new strategy, confirmed by three people familiar with it, is being pursued as Georgia was expected on Thursday to affirm Biden's victory there after a painstaking recount, and as Trump's re-election campaign said it was withdrawing a lawsuit in Michigan.

President-elect Biden has captured 306 electoral votes to Trump's 232 in the state-by-state Electoral College that determines the winner of the election, well above of the 270 needed for victory.

The winner in each state is awarded that state's electoral votes, the number of which are roughly proportional to the population.

Trump's campaign has filed lawsuits alleging electoral fraud in a number of states since the Nov. 3 election, with scant success so far. As those efforts falter, Trump's lawyers are seeking to take the power of appointing electors away from voters and give it to friendly state lawmakers from his party.

A person familiar with the campaign’s legal strategy said it has become a “more targeted approach towards getting the legislators engaged.”

America could learn a lot from a France. Macron is currently pushing legislation to squash fundamentalist Islam interfering in French politics. If America took similar aim to keep fundamental Christianity out of American politics, good Christian gentlemen like Trump and Giuliani might be disenfranchised in their attempts to undermine democracy

Not sure how you come to the conclusion Trump and his monkey are good Christian gentlemen. Nothing I have seen or heard suggests they are either.They have duped many Christians into believing their lies and fake news, which is sad and gives Christians a bad name.

Now the truth is starting to come out about Biden stealing the election. The Dominion machines don't even count votes it just gives a percentage. Why does the machine work in fractions of a vote? Come on GrIZZ explain that! Michigan had more votes than their were registered voters. What's with that david? And as far as no evidence of election fraud, 2 men in Los Angeles were arrested for voter fraud changing 8000 votes in California. You know that one is true because only a democrats would change votes in a state democrats typically win with 80% of the vote. Only a couple of weeks until Trump will be sworn in for a second term. Trump doesn't need 270 electoral votes to win, he just needs to ensure Biden doesn't have 270. Then it goes to the house where he wins.

The media must be getting desperate, attacks on people supporting Trump, I read an article attacking a member of Trumps family, thought the family members were out of bounds from the press for those in the political spectrum?, certainly haven't seen anything on hunter biden so it seems it's one rule for some and another rule for others.