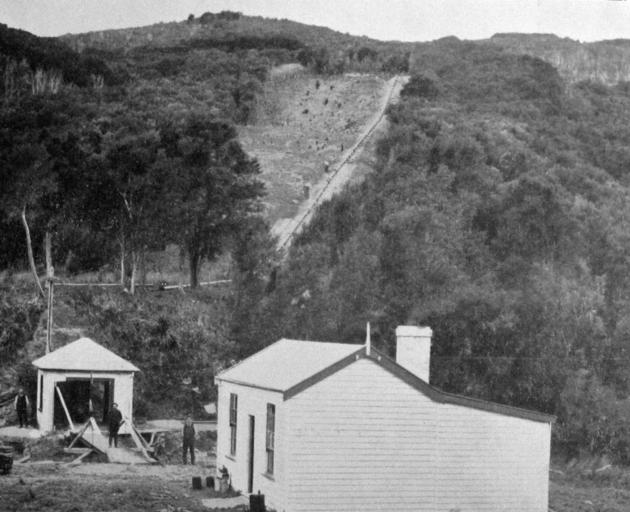 The pumping station and residence at Powder Creek, Whare Flat. — Otago Witness, 16.12.1919.
Fortune favours the brave. It has been impossible to follow without considerable anxiety the progress of the competitors in the aerial flight from England to Australia.

Nobody could safely predict that any of them would reach the goal. All doubts on that point have been set at rest, however, by the arrival of Captain Ross-Smith at Port Darwin. Captain Ross-Smith has virtually accomplished his great self-imposed task and in so doing has established a remarkable flying record.

His achievement is justly described by General Sykes, Chief of the British Air Staff, as ‘‘a brilliant and wonderful pioneer undertaking.’’

The rapidity and steadiness of the progress made from day to day by Captain Ross-Smith, and the manner in which he was able to carry out his carefully-made calculations, may tend to obscure the magnitude of the risks that attended his enterprise.

The adventures of other competitors, more than his own, recall that fact of the existence of risks at every stage.  M. Poulet, who started from Paris weeks in advance of Captain Ross-Smith, is still beset with difficulties in Burmah.

Two other competitors have apparently not yet reached Asia.  While other performances along the same route will be worth watching for purposes of comparison, the London-Melbourne flight loses most of its interest as a competition with the arrival of the first aviator at Port Darwin.

Captain Ross-Smith’s performance in covering a distance of nearly 11,000 miles in 28 days is remarkable as an example of the reliability of the best aeroplane types in a test of exceptional severity.

The fact that the actual flying time was only 124 hours — a little more than five days —  is still more remarkable.  But most remarkable of all is the performance as an example of what human courage, endurance, and initiative can accomplish.

Fish are scarce, and are consequently dear in price.  The Oamaru fishing boats that visit the reefs (says the Mail) secure only small catches, and those that try for groper have to travel 40 miles out to make their trips successful.

A 40-mile journey can be undertaken by only the largest boats, and the cost in benzine is heavy.  A year or two ago a 20-mile run out was supposed to be venturesome, but groper cannot now be obtained at 20 miles out, and therefore the longer trip is a necessity.

A month’s brilliant sunshiny weather would warm the water closer to the land, but as long as winter is mixed with summer, with winter predominating, the fish will remain in deeper water, which is warmer than that closer to the bank.  A Kakanui fisherman, who nets at the mouth, states that he has never known a poorer season for mullet.

The gale that raged on Friday morning caused considerable damage to the Morton Mains Dairy Factory.  The chimney stack that rose about 30ft above the factory roof was blown down, breaking about 20ft from the top and crashing through the factory roof.

The fall completely smashed one vat and agitators and spoilt 1100 gallons of milk.  Luckily the men employed in the factory were at the time engaged packing cheese in another room and missed the avalanche of brick and mortar.