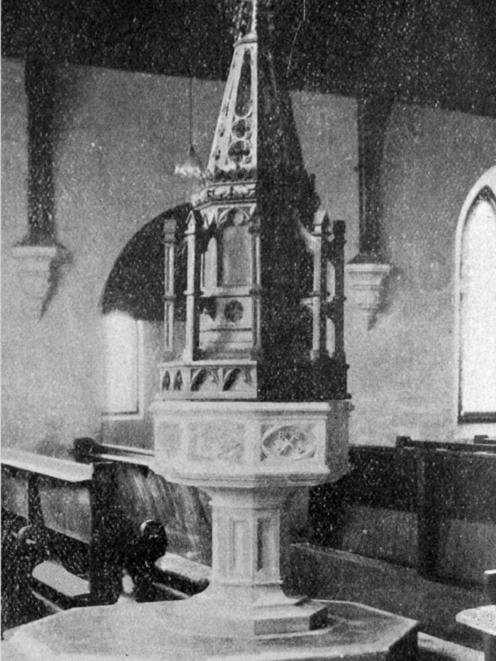 The memorial font canopy at St Peter’s Church, Caversham, constructed of oak and representing a church spire in Gothic style. The base is 2 feet 6 inches wide and the height is 7ft. The richly-carved, octagonal structure has flying gutresses at each point and a carved cross at the summit. The sculptor was Mr A.E. Shank, of Roslyn, commissioned by Mr C. Caldwell in memory of the late vicar Rev J.L. Mortimer. — Otago Witness, 10.5.1921
At a conference of representatives of the Mother’s Union from all parts of the world held in London last year it was decided to set in motion a "wave of prayer". A chart was drawn up giving the days when each diocese within the Anglican communion should become the spot upon which the thought of all the other parts would be focused and its need specially remembered. The wave is due to touch the diocese of Dunedin on July 13 to 16, and for these four days people in all parts of the world will be praying for the church here. It has been arranged accordingly to issue a special call to the women of Dunedin. A mission in the week following the days of prayer will be held in each church in the city and suburbs. There will be a celebration of the Holy Communion each morning of July 19, 20 and 21, an afternoon meeting addressed by a woman missioner, and a mission service in the parish church, to which women will be invited to bring husbands and friends. Already considerable interest has been aroused in prospect of this venture, and the workers in the several churches are showing signs that they are eager to take part in it. As part of the preparation, it has been arranged to hold a service of intercession on Wednesday evenings in each of the parish churches.

WEA seminar at Roslyn
The attendance at the weekly meeting of the Roslyn class of the WEA on Monday evening was slightly affected by the unpleasant weather conditions, but a profitable evening resulted. The tutor arranged a "seminar", or discussion, by the class of the phases of sociology so far covered in the course, and before commencing, Mr L.H. Osborne, chairman, introduced to the class and welcomed on behalf of the students Professor Pringle, University lecturer on economics, whose valuable work in the WEA movement he especially commended. Acknowledging the cordial welcome accorded, Professor Pringle briefly and succinctly referred to the great value of the tutorial work undertaken by the WEA, which was particularly concerned in the development of truth, standing for fellowship and joy in social accomplishment, one of the deepest things in life. Referring to the stupendous difficulties facing the Old Land today, he struck a clear note of confidence in our race to reach a solution, aided by accumulated knowledge directed along proper lines, which would bring about a great social uplift — a tide of advance that nothing could stem. The professor later joined with the class in a discussion on "Ideas of Progress".

Unemployment in Southland
Although probably not as pronounced as in other parts of the dominion, the unemployment problem is nevertheless making itself felt to some extent in Southland (wires our Invercargill correspondent). Yesterday men were wanted to work two boats at Bluff, and the number offering was between 30 and 40 in excess of that employed, and from 20 to 25 more were wanted at the Labour Department’s offices in Invercargill for instructions to proceed to the port. It was considered, however, that if there had been sufficient trucks available all the men waiting at Bluff would have been utilised in the loading of frozen carcasses. This rush for temporary employment is unusual at Bluff, and it affords a pretty fair indication that there are plenty of men available for labouring work. Most of the men out of work are not skilled. It is worthy of note; in fact, so far as the skilled trades are concerned there appears to be comparatively little unemployment locally. Two Union Steamship Company boats are expected at Bluff at the end of the week, and they should assist in the temporary absorption of the surplus labour.