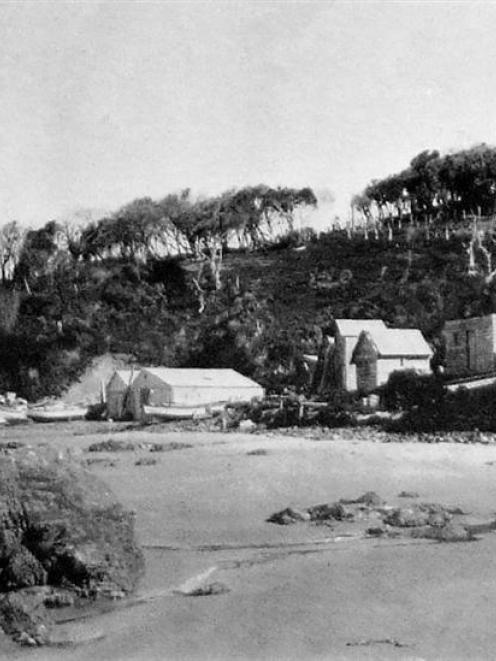 The fishing station at Port Molyneux. - Otago Witness, 12.3.1913. Copies of picture available from ODT front officer, lower Stuart St, or www.otagoimages.co.nz.
Unless some other lines than the Union Steamship Co. come to the rescue, it is safe to predict that the shipping route from Hobart to New Zealand or vice versa will be via Sydney in future for all passengers who have time and money for it, says the Hobart Mercury.

We are hopeful, however, that the Union Company's announced purchase of the old Granges, now known by their Irish names of Tyrone, and so on, is not solely with a view to their joining the new Niagara on the trans-Pacific route with which Tasmania will get no nearer connection than Sydney or Melbourne.

The only fault most people have to find with the Dunedin management of this great shipping company, which holds in its hands so much of the fate of Hobart and Tasmania, is that, like some other Dunedin ventures, it is a little too Scotch in the Bawbee-saving trait, and not sufficiently Scotch in the characteristics which have made the Scots at the head of Burns, Philp, and Co., such a power in Australia.

The truly enlightened business man is possessed of imagination and large ideas. He can see the possibilities and go out to meet them and lead them along. The Union Company is not wholly without this imaginative faculty, or it would never have been so enterprising as to build a Niagara to create a trade for herself. But somehow - doubtless because Dunedin is not Hobart - the company has never shown even a good working imagination regarding the possibilities of Hobart and Tasmania.

Who can doubt that some day we shall have a daily service, quick and steady, between the mainland and our northern railway terminus? Or who can doubt that we shall some day have a good direct service by large boats between Hobart and Sydney?

• At its meeting yesterday the General Committee of the City Council had before it the plans and specifications for the new tepid swimming baths, which are to be erected in Moray Place at a cost of 7500.

These have been prepared by the city building surveyor (Mr G. W. Gough), and provide for a tile bath 100ft long by 40ft wide. The plans also include provision for Turkish baths, which can be added at any convenient time. Several competent judges who have seen the plans consider that when erected the baths will be the most up-to-date in the dominion.

The committee approved of Mr Gough's designs, and it was decided to call tenders at once, making them returnable by the 15th inst., so that the work may be put in hand as soon as possible.

• Towards the closing of the land ballot at Napier, although all the sections had been applied for, on account of a number having made application for more than they could hold, one was left which was open for the unsuccessful.

Two went to the ballot - one a stalwart young fellow, the other in more advanced years. On the number being drawn, the section fell to the elder man. The young fellow, with true manliness, and in spite of the disappointment depicted on his countenance, advanced with outstretched hand to congratulate his more successful rival.

The latter looked up, and, noticing the disappointed look, at once gave up the section to him, saying that he would have another chance some other time.

A general handshake followed-the young fellow being congratulated on his luck, the elder for his generosity in giving up the section. In spite of our commercialism there is still some milk of human kindness left in the world, is the comment of the Napier Telegraph. - ODT, 11.3.1913.