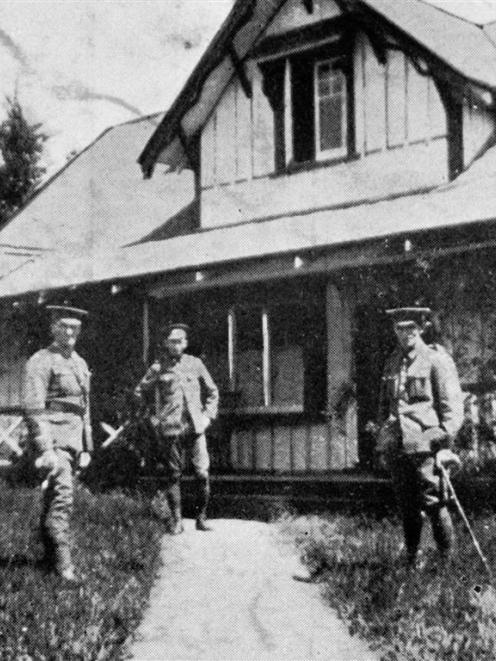 Mrs Edmond’s home at Waikouaiti for invalided soldiers. — Otago Witness, 5.1.1916.
Mention has been made in British journals of the fact that the flat-topped caps of the British troops make excellent marks, even at a distance of several miles, owing to the reflection of the light from its tightly-stretched surface.

In the manoeuvring of troops in and about the camps in New Zealand, according to the Dominion, this has been demonstrated.

At a distance of two miles the caps of the officers have been seen to gleam like white-painted objects.

The troops, however, usually manoeuvre and skirmish in their felt hats.

A soldier who has been through a good deal of this mimic warfare says he was surprised to find what an excellent mark these felt hats made.

It was easy to pick up men who were scattered over the ground covered with grass and scrub, merely by their hats, though the wearers lay as flat as possible upon the ground.

On the other hand, a hatless man was most difficult to see.

Possibly, he said, the service cap, with the wire stiffening taken out, will prove to be the best head-gear for the soldiers to wear in action.

• Many good stories are told of men over age keen to join the Expeditionary Force, but the story concerning a well-known Rangitikei settler will take a lot of beating.

His real age is 63, but, anxious to do his little bit for the Empire, he registered at the local defence office, giving his age as 39.

He was passed by the doctor, who was apparently satisfied with his statement as to age.

In course of time the old-young soldier arrived at Suez with his company - the fittest man of them all.

This ardent patriot has a son in camp whose age is 38. In another case a married soldier, who looked as young as he said he was, and who, of course, gave his correct age when he enlisted, was applying for separation allowance for his wife.

• A vigorous assault at arms was made against the local police station about 6.30 on Saturday evening.

Equipped with the primitive armament of our early ancestors, an elderly man sought to force a violent entry, with the object, apparently, of bearding the lions in their den.

He opened the assault with a long-range bombardment of road metal, several pieces of which found their billet in Sub-inspector Broberg's room through the window, which was badly shattered as a result.

Pushing home the attack, he charged wildly into the watch-house, and attempted to stab Constable Fallon with a large sheath-knife.

It was now a case of two strong men coming face to face, and the struggle that ensued would have been worthy of a gladiatorial arena.

Eventually Constable Fallon got his assailant's head under one arm, and also gained control over the hand that held the knife.

At this moment Detective Hammerly entered the watch-house, and with his advent the struggle was over.

The bellicose one was at once placed in a padded cell in the peaceful atmosphere of which he would have ample opportunity for reflection upon the strange series of incidents. - ODT, 10.1.1916.