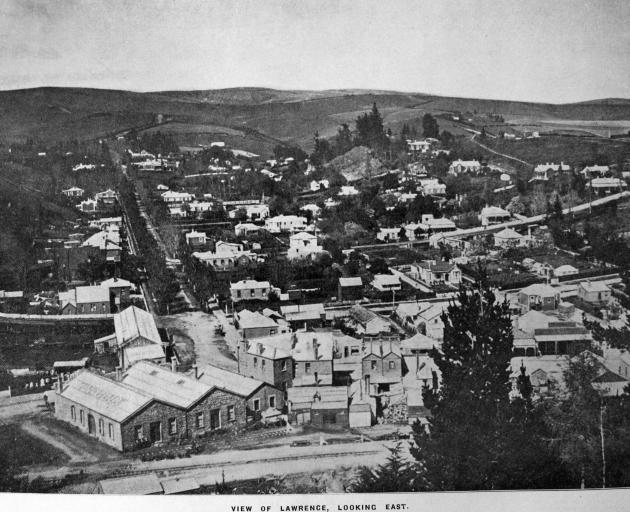 View of Lawrence, looking east. — Otago Witness, 31.5.1921.
The romantic atmosphere which surrounds the Gabriel’s Gully story makes an irresistible appeal to the popular imagination, and ten years ago rendered the celebration of the jubilee of the discovery of gold in New Zealand a striking success.

Although the celebration this week at Lawrence cannot in the nature of things be equally impressive, yet the flavour of romance still lingers, and it is certain to exercise its power of attractions upon as many of the survivors of the gold miners of 1861 as can make it at all convenient to be present.

Gabriel Reed made his discovery at Bluespur just at the time when, the great force of the Australian rush having spent itself, adventurous miners were eager to exploit fresh fields.

Otago, spared the particular anxiety of the troublesome Maori War, upon which attention was concentrated to the north, was free to engage actively in the search for gold, and as the diggers went north along the valley of the Clutha, they made fresh and important discoveries.

The discovery of gold had a marked influence on the future of New Zealand. It induced a rapid influx of population, all the best elements of which remained in the country and helped to lay the foundation of a sane and sound democracy.
The gold miners were a hard- working set of people, who, brought up as most of them may have been, in a rough school, possessed as a class robust virtues, which well fitted them to be pioneer settlers in a British colony.

Originality in golf methods was observed at Otatara on Sunday, when a party of Sunday golfers went round the course on bicycles. It is doubtful if the innovation would be viewed favourably by golfers generally, but at least the original form provided amusement for a large number of interested spectators.

“I look upon this as a very serious offence,” declared Mr J.W. Poynoton SM, in the Auckland Magistrates Court, when three women were charged with harbouring a runaway from an industrial school. A great many people seem to think they were doing a proper thing in harbouring an escapee, observed the Magistrate. It was mere sentimentalism, apt to lead to harm.

Boys and men in prison and reformatory institutions were well fed, clothed and treated. When they ran away from wholesome restriction the foolish persons who harboured themassisted them to commit thefts and other crimes, and to contaminate others. The proper thing was to feed the escapees if they were hungry, but to inform the police promptly of the matter, and so prevent the escapee from being a menace to the community.

The defendants would be fined £2 each.

London: The Mount Everest expedition has been divided into three parties. One left on Friday and the remainder will go tomorrow to the base in Tingri, in the Jong district, 30 miles north of Mount Everest. The Government has supplied 100 mules, trained for work at high altitudes, and the bearers will be natives living on the lower
slopes of Mount Everest.

It is hoped to map out thousands of square miles of unexplored country which is not known to Europeans, but the main work of the expedition will be the discovery of a route to the top of Mount Everest.

- We're from the Old World. We call this place "Orans of Arabia".

Remember, We have gold because we cannot trust governments!

Industrial schools were described in 'Children of the poor', by John A Lee. Parents had no say in court sentencing of children to violent reformatories, operated as prison farms.