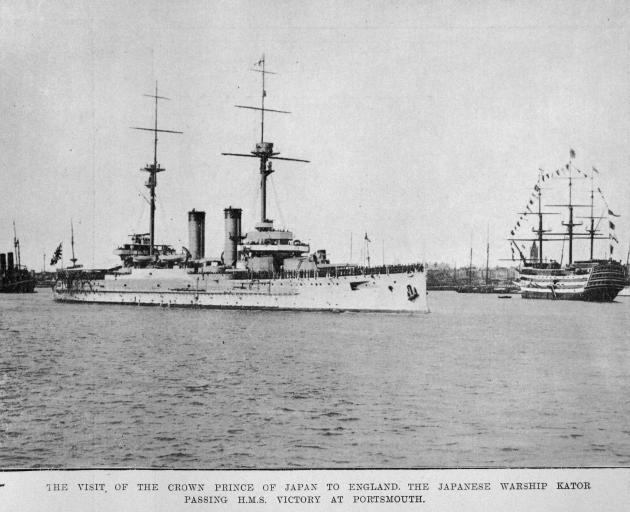 The visit of Crown Prince Horohito, of Japan, to England: the warship Katori passes HMS Victory at Portsmouth, on May 9, 1921. - Otago Witness, 5.7.1921.
Japan heir arrives in England

London, May 7: The Japanese Crown Prince Hirohito, accompanied by his Imperial Highness Prince Kanin, arrived at Spithead on board the battleships Katori and Kashima, escorted bv a flotilla of British destroyers. The Princes will land at Portsmouth on Monday, when the Prince of Wales will welcome them and accompany them to London. The King and other Royal personages and Mr Lloyd George and other ministers will welcome them at Victoria Station, from which they will be driven in State carriages to Buckingham Palace through streets lined with troops. At the invitation of the Prince of Wales the High Commissioners will attend a dinner on Wednesday for the purpose of meeting the Japanese Crown Prince.

The Rev J.F. Goldie who went to the mission field in the Solomon Islands in 1902 had something interesting to say on Saturday concerning the missions. He, the late Dr George Brown and Rev S.R. Rooney begin their labours in the western part of the Solomon group because no missionary effort had ever been made there. Today this was regarded as one of the most successful of all missions under the Methodist jurisdiction amongst people who 18 years ago were pure savages. They now numbered about 10,000 adherents who attended their services in addition to 3500 baptised members but their influence extended much beyond that number. In addition to the ordinary religious services they had 3800 natives attending day schools and also a technical establishment where the natives afforded the opportunity of learning carpentry and boat building. The mission also gave instruction in agriculture, the natives being shown how to select and cultivate the best seeds and instructed in the work of planting and dealing with the various tests that infected the coconut plantations.

Preparations for the conquest of Mount Everest are proceeding apace. Advices from India state that the reconnoitring party expect to make a start on May 16. Sir Francis Younghusband, the famous explorer, addressing the Royal Geographic Society confessed that some very pointed questions had been put as the object of the ascent — as to what the mountaineers intended to do when they got to the top, and as to the good which the conquest of the peak would bring to the general mass of humanity. In reply he said if the human race had always acted in the spirit of the general mass it would never have emerged from the primeval forest. We should still be timid, uncultured people hiding in caves and forest depths. The advantage that would come from ascending Mount Everest was that once the highest peak had been scaled men would pluck up courage to ascend all manner of other mountains. The stimulation of mountain climbing in general would bring more beauty to light, and beauty was one of the world’s richest riches.

“The biter bitten” was the case with some keas who fell to the guns of a deer-stalking party in the upper Rangitata recently. The boy of the party secured the heads and made 6 shillings a head (5s from Government subsidy) thereon. The rest of the party made a discovery which appears quite new. In short, they found the kea made a very appetising substitute for poultry, and also provided a distinctly pleasing brand of chicken broth.